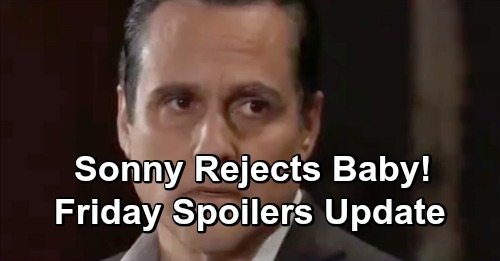 General Hospital (GH) spoilers for Friday, February 15, tease that Lulu Falconeri (Emme Rylan) will remain riled over Franco Baldwin’s (Roger Howarth) alleged actions. Her manipulated hypnosis session left her convinced that Franco attacked her. During a conversation with Laura Webber (Genie Francis), Lulu will hope that Franco gets what he deserves soon enough.

Luckily, Jordan Ashford (Briana Nicole Henry) is finally listening to her instincts. The evidence has mounted against Franco, but none of it really fits. Of course, Jordan knows that if Franco was framed, the real killer is still out there. That’s why she’ll need a plan to expose the true murderer and put an end to Port Charles’ latest nightmare.

Jordan will tell Curtis Ashford (Donnell Turner) what she has in mind on Friday. She’ll confess that it’s unorthodox for the police to take this route, but she’ll feel like it’s the quickest path to justice. Jordan will believe they can catch the culprit if they have Franco plead guilty. The serial killer might let his guard down since he’d believe he’d gotten away with his crimes.

Meanwhile, Franco will warn Elizabeth Webber (Rebecca Herbst) to back off for a while. He’ll be on cloud nine over their recent marriage, but he’ll insist Liz has to keep her distance now. Franco won’t want Liz getting tangled up in his chaos and making life difficult for herself or the boys.

Elizabeth will likely protest since she’s so determined to support Franco. Unfortunately, her support could be in jeopardy thanks to Jordan’s plot. The commissioner will want Franco to keep his mouth shut about their collaboration. Franco would have to let Liz believe he was actually pleading guilty and accepting responsibility for the crimes.

Jordan will speak with Franco privately and point out that it’s his call. Franco can walk out of that police station a free man right now or he can help take down a dark force in PC– the same dark force that killed his beloved almost daughter Kiki Jerome (Hayley Erin). It looks like Franco will choose to assist Jordan and put his relationship at risk in the process.

At GH, Ava Jerome (Maura West) and Ryan Chamberlain (Jon Lindstrom) will get busy in Dr. Kevin Collins’ (Jon Lindstrom) office. Ryan will fling stuff off the desk as the passion revs up. They both certainly feel a lot for each other, but it’s all based on a huge lie. Once Ava inevitably learns the truth about the man she’s sleeping with, she’s sure to unleash her wrath in a big way.

Until then, General Hospital spoilers say Maxie West (Kirsten Storms) will ponder a different mystery. She knows Valentine Cassadine (James Patrick Stuart) has a secret that ties in with Sasha Gilmore (Sofia Mattsson). Since Sasha is believed to be Nina Reeves’ (Michelle Stafford) daughter, red flags have been raised.

Maxie will be determined to watch out for Nina and that means getting to the bottom of this. Peter August (Wes Ramsey) put Maxie on this suspicious path, so he’ll be in this just as deep. Maxie will urge Peter to pitch in as she works to unravel Valentin’s deception. As for Sasha, she’ll ponder ways to help Dr. Griffin Munro (Matt Cohen) cope with his crushing loss.

Other General Hospital spoilers say Carly Corinthos (Laura Wright) will be disheartened. She was clearly nervous about sharing her pregnancy news with Sonny Corinthos (Maurice Benard), but the time had come. Now that Sonny’s in the loop, his reaction won’t be what Carly was hoping for.

However, Sonny should show more joy once he takes it all in. A baby will be a major adjustment, but their love should overcome the hurdles ahead. We’ll give you updates as other GH details emerge. Stick with the ABC soap and don’t forget to check CDL often for the latest General Hospital spoilers, updates and news.