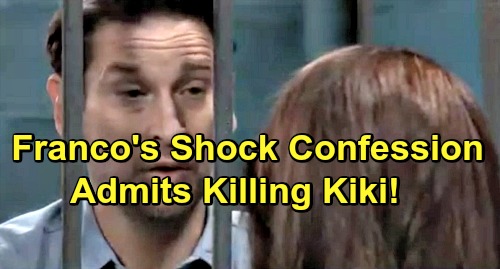 General Hospital (GH) spoilers tease that Franco Baldwin (Roger Howarth) will face an impossible decision. Jordan Ashford (Briana Nicole Henry) finally realizes the facts just aren’t adding up. She can tell that Franco’s been framed, but she intends to throw the book at him with a goal in mind.

Jordan will want to flush out the real killer, but she’ll need Franco’s help. That’s where that impossible decision comes in. Helping the cops catch Kiki Jerome’s (Hayley Erin) killer seems like an easy choice for Franco, but it won’t be. Jordan will insist that if they want to pull this off, no one else can know what they’re doing.

Curtis Ashford (Donnell Turner) will probably be the exception since he helped Jordan see the light about Franco. It looks like he’ll be in the loop, but that’s it. Jordan will be adamant that the charges have to stick as far as everyone else is concerned. She’ll want Franco to plead guilty as part of the plan.

Franco will be nervous about this strategy, especially since Jordan will want Elizabeth Webber (Rebecca Herbst) kept in the dark. She may think the only way to sell the story is for Liz to be just as appalled as everyone else. It would be brutal for the “Friz” family, but it’d help catch Kiki’s killer and Lulu Falconeri’s (Emme Rylan) attacker.

Jordan might believe they can drop the killer’s guard if he feels like it’s all over. Then again, she may suggest the murderer will get jealous if Franco takes the credit with a guilty plea. Whatever the case, Jordan will want to know if Franco’s in or out.

She won’t force Franco to do anything, but she’ll remind him that this is his chance to get justice for Kiki and right some wrongs.

It appears Franco will get on board, so what will Liz think once he pleads guilty? Will her faith finally be shaken? Could Elizabeth suspect that something’s up?

If GH let Liz be smart, they’d have her remember that Franco was sitting in a movie theater with her while Kiki was getting murdered. Liz, Franco, Jake Webber (Hudson West) and Aiden Webber (Jason David) all took in a flick that evening.

However, we don’t have high hopes for that. Laura Webber (Genie Francis) met with the “Friz” fam for their “annual post-movie pie,” but she’s been raging at Franco as if she never even saw him that night. General Hospital clearly wanted to make Franco a suspect no matter what, so we’ll just roll with it!

As for what’s next in the serial killer saga, will Jordan’s scheme work? Will Ryan Chamberlain (Jon Lindstrom) slip up thanks to Jordan and Franco’s collaboration?