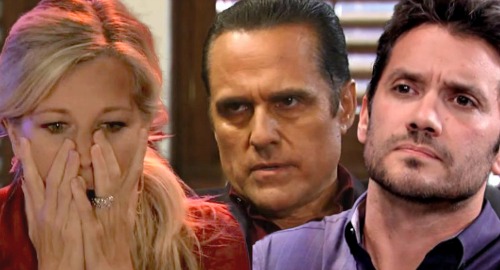 General Hospital (GH) spoilers tease that Sonny Corinthos (Maurice Benard) will have a difficult decision to make. He’ll score new leads on Dante Falconeri’s (Dominic Zamprogna) potential location and wonder if he should try to find him. Sonny will feel like he needs to bring his son home to his family.

Ordinarily, Sonny would just send someone on his payroll to handle this. It’d make more sense, but soap stories aren’t usually about logic. They’re about delivering drama. GH will certainly bring plenty of it due to Sonny’s crucial choice. It wouldn’t be such a big deal for him to leave if it weren’t for Carly Corinthos’ (Laura Wright) high-risk pregnancy.

However, Carly recently found out she’s got a bun in the oven. She’s been instructed to monitor her blood pressure closely and keep stress to a minimum. Naturally, having Sonny off on some dangerous mission wouldn’t help with that. He may be hesitant to leave Carly when she’s pregnant and in need of support.

Still, Sonny’s already lost one son and doesn’t want to lose another one. Morgan Corinthos’ (Bryan Craig) death nearly broke him, so he might not be able to handle losing Dante, too. At least that’s how Sonny will feel as he considers his options.

There’s a good chance Dante will die anyway, so Sonny may just have to cross that grief bridge when he comes to it. Nevertheless, Sonny will want to do everything he can to save Dante from danger. Unfortunately, he could be putting Carly in some danger of her own if he leaves. Sonny would add to Carly’s pregnancy risks since she’ll be so worried about him.

Carly will probably urge Sonny to go, but he may still feel like he’s abandoning her. The timing isn’t ideal anyway since Josslyn Jacks (Eden McCoy) is set to watch Oscar Nero (Garren Stitt) slip away. If Oscar suddenly heads downhill fast, General Hospital spoilers say Carly would have to handle Joss’ despair by herself.

Sonny could even get caught up in Dante’s prison peril. What if Dante’s a hostage and Sonny becomes one, too? Since we know Jasper “Jax” Jacks (Ingo Rademacher) is headed back to Port Charles, he might step up when Sonny can’t. That could easily lead to a renewed spark for Jax and Carly.