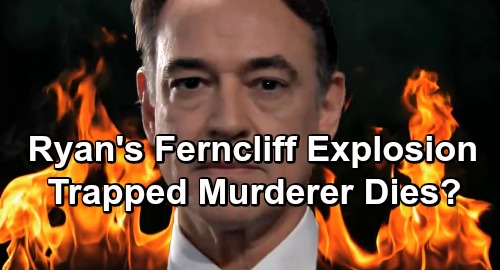 General Hospital (GH) spoilers tease that Dr. Kevin Collins (Jon Lindstrom) could give Ryan Chamberlain (Jon Lindstrom) a deadly idea. Ryan happily locked Kevin in the Ferncliff basement with Laura Webber (Genie Francis) and proceeded to taunt them. However, Kevin tried to turn the tables. He pointed out that Ryan’s backed himself into a corner, which Laura agreed with.

Ryan didn’t appreciate Laura’s suggestion that Kevin was so much smarter than his brother. He clearly values his intelligence above all else. Ryan is always outraged when people fail to recognize the brilliance of his crimes. He thinks he’s a true criminal mastermind, so Kevin and Laura may have made a huge mistake. It was probably a bad idea to challenge Ryan like that.

Kevin argued that Ryan would have to go on the run. He can’t just leave their bodies to be found down there, so Kevin believes his evil twin will need to flee. General Hospital spoilers hint that Ryan will certainly try it. That’s undoubtedly why Ryan proposes to Ava Jerome (Maura West) on Thursday’s GH episode. He’s asked Ava to run away with him before, but it’s time to rev up his efforts again.

Of course, Ava may continue to drag her feet due to Avery Corinthos (Ava and Grace Scarola). If Ava refuses to go, what will Ryan do? He could kidnap her – and he probably will when his plot goes wrong. Still, that needs to be a last resort. Ryan will want to keep this Kevin charade going, especially after Kevin and Laura insisted the jig would be up. He’ll probably feel the need to prove it to himself.

That means Ryan will have a problem to solve. If the patient he’s worked closely with is found dead with the mayor in Ferncliff’s basement, that could turn into a real nightmare. Ryan doesn’t need that kind of headache to deal with. This is the kind of thing that could indeed get him caught. The discovery of Kevin and Laura’s bodies would help the cops realize Ryan is alive and tormenting Port Charles.

If Ryan can’t let their corpses be found and doesn’t want to leave without Ava, what’s his best strategy? We’d say that’d be killing his hostages and destroying all evidence. Perhaps Kevin could plot his flashiest murder yet by setting up a shocking explosion. He could hope the fire that results will burn until there’s nothing left behind.

Ryan was once presumed dead in an explosion, so this would be a fitting thing for him to plan. Plus, Ferncliff could stand to go up in smoke anyway! It’s a horrible place that has some serious security issues. They could stand to rebuild it and start fresh with a better system.

It might be interesting if Ryan inadvertently got caught in his own deadly trap. Could he really be killed in an explosion this time? It’d be more satisfying to watch Ava take Ryan out, but General Hospital fans know anything can happen in PC.

Whatever the case, Kevin and Laura should make it out of this mess alive. We’ll give you updates as other GH news comes in. Stay tuned to the ABC soap and don’t forget to check CDL often for the latest General Hospital spoilers, updates and news.