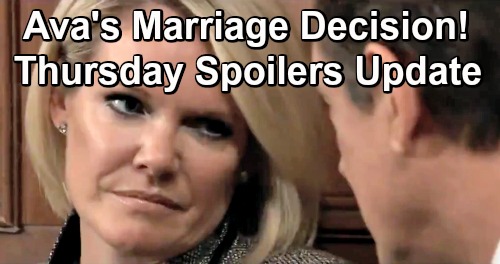 General Hospital (GH) spoilers for Thursday, February 21, tease that Carly Corinthos (Laura Wright) and Josslyn Jacks (Eden McCoy) will both have secrets. GH fans know Carly recently found out she’s pregnant, so we’ll see if she chooses to share with Joss now. As for Josslyn, she’s planning a road trip with Oscar Nero (Garren Stitt) and the other teen scene members.

Even if Joss tries to hide the truth, Carly will probably sniff out the trouble. She can typically pick up on Josslyn’s suspicious behavior. Carly will suggest that Josslyn wasn’t going to let “her” know either. She might be talking about Dr. Kim Nero (Tamara Braun), who would likely have reservations about a teen-only car ride over to Niagara Falls

Kim’s pretty protective since Oscar doesn’t have much time left. She wants him to enjoy his remaining days, but not so much that he cuts them short. Carly may argue that Joss and Oscar need to inform Kim of their plans. That way Kim can decide if she approves and keep in touch with Oscar while he’s gone.

In the meantime, Cameron Webber (William Lipton) will blast Elizabeth Webber (Rebecca Herbst) over Franco Baldwin’s (Roger Howarth) guilty plea. He’ll sense that Liz still doubts Franco’s guilt, so he’ll think his mom’s really lost it. Elizabeth will indeed have doubts, but that goes both ways. Now that Franco has admitted to these violent crimes, Liz just won’t know what to believe anymore.

While Liz gets support from Drew Cain (Billy Miller), Lulu Falconeri (Emme Rylan) will wonder why Franco had a change of heart. He was all set to plead not guilty before, so Lulu just won’t understand. She may hope to figure that out soon, but she’ll have more pressing matters to deal with. Some news regarding Dante Falconeri’s (Dominic Zamprogna) whereabouts is on the way.

General Hospital spoilers say Robert Scorpio (Tristan Rogers) will have some updates, but they probably won’t reveal much. Sonny Corinthos (Maurice Benard) will try to pry more out of Robert, but it seems the WSB has lost track of Dante entirely. This is all setting up Dante’s comeback storyline, which should feature a prison escape.

Other General Hospital spoilers say Sam McCall (Kelly Monaco) will reassure Jason Morgan (Steve Burton). He’ll battle some worries thanks to new info from Damian Spinelli (Bradford Anderson), but Sam will think she can take care of Shiloh – even if he poses a greater risk than they expected. She’ll head off on a brief getaway with Shiloh before long, but that’ll turn out to be a terrible decision.

Finally, Ava Jerome (Maura West) will be shocked by Ryan Chamberlain’s (Jon Lindstrom) proposal. “Dr. Kevin Collins” will ask Ava to marry him, but she wasn’t prepared to take this step so soon. However, Ryan’s awfully good at turning on the charm and saying all the right things. He should be able to get Ava on board at some point.

It sounds like Thursday’s episode will be packed with action. We’ll keep you posted as other GH details emerge. Stick with the ABC soap and don’t forget to check CDL often for the latest General Hospital spoilers, updates and news.