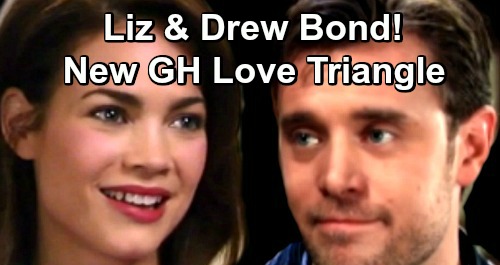 General Hospital (GH) spoilers tease that Elizabeth Webber (Rebecca Herbst) will go through a terrible ordeal. She put all her faith in Franco Baldwin (Roger Howarth), so his guilty plea will leave her rattled to the core. Liz married Franco in lockup to show how much faith she had in him. Drew Cain (Billy Miller) also had total faith in his friend, so he’ll feel the need to step up for Liz as she copes.

Elizabeth will even remove her wedding ring, which could mean she plans to have the marriage annulled. It all depends on how quickly this chaos gets cleared up. Unfortunately, it could be a while since Jordan Ashford (Briana Nicole Henry) will find herself comatose after a shocking accident. Franco was counting on Jordan to help him out if he followed orders, but she won’t be able to do that.

Drew will run Jordan down after going blind behind the wheel, so that’ll be another way to push Liz and Drew closer. General Hospital spoilers state that Liz will fret over Drew next week. She’ll probably pay Drew a visit at GH and do her best to be there for him. Liz will want to return the favor since Drew’s been so supportive lately. She really appreciates how Drew looks out for her as well as the boys.

General Hospital spoilers say Drew will continue to watch over them, so GH might be gearing up for a bit of a love triangle. They seem to have dropped Drew’s romance with Dr. Kim Nero (Tamara Braun) for now. It could start back up later, but there’s just as much of a chance that Drew will lean on Liz after Oscar Nero’s (Garren Stitt) death.

GH is suddenly putting Liz and Drew in each other’s orbit again, which may be significant. Even after Liz finds out about Franco’s plan with Jordan, she’s going to be hurt that he deceived her. Liz might feel like Franco should’ve stood his ground on telling her the truth. She may not be so quick to forgive and forget.

Franco will have brought a great deal of pain to the “Friz” family, so his reunion with Liz could be a rocky one. Will Liz be drawn to Drew in the aftermath of Franco’s deception? It’d make for some interesting conflict since Franco and Drew have formed a genuine friendship. Drew’s surely lonely and eager to find love, so a familiar flame like Liz might be a good option.

Franco and Liz seem like the endgame here, but that doesn’t mean General Hospital won’t make them work for it. Drew could become an obstacle on their path to happily ever after. We’ll give you updates as other GH news comes in. Stay tuned to the ABC soap and don’t forget to check CDL often for the latest General Hospital spoilers, updates and news.