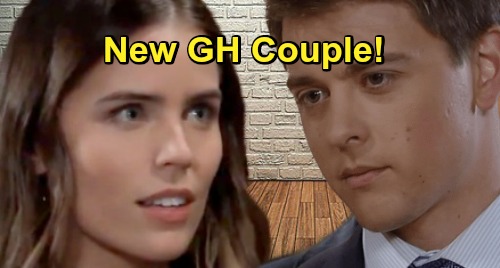 General Hospital (GH) spoilers tease that Michael Corinthos (Chad Duell) has an intriguing meeting in his future. During the week of March 4-8, Michael will have a conversation with Sasha Gilmore (Sofia Mattsson). GH fans know Michael has been unlucky in love for quite some time. Could Sasha finally be a good match for the loneliest Corinthos?

Michael is clearly interested in Willow Tait (Katelyn MacMullen), but she’s already falling for Harrison Chase (Josh Swickard). Of course, Chase is completely smitten at this point. He thinks Willow is pretty much the perfect woman, so General Hospital spoilers say he’ll do his best to pull her closer.

There’s still a chance for Willow and Michael down the road, but what about right now? Why should Michael have to suffer alone? Michael’s love interests tend to end up dead or behind bars, so he’s due for a solid romance. Will he hit things off with Sasha and potentially ask her out?

Michael obviously isn’t having any luck with online dating. He tried to keep a chat going with Zoey (Brooke Burghstaler), but she was already busy planning her next date. After that train wreck of a night, there’s no way Michael’s ever going to see Zoey again. He needs someone intelligent that he can truly connect with, and Zoey couldn’t offer any of that.

However, Sasha is a bright girl with a charming personality. She certainly won Nina Reeves’ (Michelle Stafford) heart right off the bat! Nina might even do some matchmaking for Michael and Sasha. She knows that Michael went through a total nightmare with Nelle Benson (Chloe Lanier). Nina might suggest that Sasha would be the kind, loyal and honest woman that Michael needs.

Unfortunately, the honest part wouldn’t be accurate. Sasha’s keeping a huge secret, but so is Willow. Neither one of them is doing it with evil intentions, so that could help them both out in the end. It’s not like when Nelle plotted against Michael’s family multiple times or chose to make him think his own son was dead.

Bottom line, Sasha and Willow would be great love interest options for Michael. Since Willow’s taken at the moment, should General Hospital pair up Michael and Sasha? It’d at least be worth a shot, which could be why they’ll have this upcoming meeting. A little onscreen chem test never hurts!

GH viewers won’t want to miss the romantic shakeups ahead. We’ll give you updates as other news comes in. Stay tuned to the ABC soap and don’t forget to check CDL often for the latest General Hospital spoilers, updates and news.