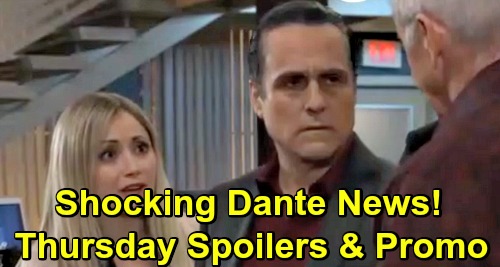 General Hospital (GH) spoilers for Thursday, February 21, tease that Ryan Chamberlain (Jon Lindstrom) will make a shocking move. He’ll surprise Ava Jerome (Maura West) by popping the question, so she’ll have to give him an answer. Ava will likely say yes or at least start inching in that direction. She believes “Dr. Kevin Collins” is her anchor, so she’ll want to build a life with him soon enough.

Meanwhile, Elizabeth Webber (Rebecca Herbst) will feel like the life she planned with Franco Baldwin (Roger Howarth) has gone up in smoke. Liz was devastated over Franco’s guilty plea, but part of her will suspect something’s off. When Cameron Webber (William Lipton) realizes Liz still doubts Franco’s guilt, he’ll think she’s completely lost her mind.

Liz may wonder that herself a little later. General Hospital spoilers say she’ll chat with an equally perplexed Drew Cain (Billy Miller). He’ll comfort Liz and agree that this is all very bizarre. However, Drew and Liz can’t prove that Franco’s innocent. He admitted to the murders in court, so they’ll definitely have doubts about their faith in him, too.

Even Lulu Falconeri (Emme Rylan) feels like something strange is going on, so she’ll keep pondering the situation on Thursday. As an investigative journalist, Lulu’s always trying to get to the heart of the story. Perhaps she’ll resolve to figure out what Franco’s real motive for admitting guilt is.

However, Lulu will get a bit distracted by some updates on Dante Falconeri (Dominic Zamprogna). Robert Scorpio (Tristan Rogers) will pass along some information about Lulu’s missing husband. She’ll wonder if the bureau found him, but Robert may suggest Dante’s still unreachable.

Sonny Corinthos (Maurice Benard) will grow suspicious of Robert’s claims soon after. Maybe he’ll think there’s more to the story and confront Robert about what he knows. GH spoilers hint that Dante is likely being held captive somewhere, so this hot plot will get even hotter eventually.

Over with Anna Devane (Finola Hughes), she’ll appreciate the rock she’s found in Dr. Hamilton Finn (Michael Easton). Anna will insist that Finn always knows the right thing to say. Across town, Carly Corinthos (Laura Wright) will call Josslyn Jacks (Eden McCoy) out on her secret. She can tell when her daughter’s up to something, so she may pry the road trip news out of Joss.

Carly will also realize someone else was supposed to be left in the dark. It looks like she’ll determine that Dr. Kim Nero (Tamara Braun) wasn’t going to be filled in. Kim needs to know where Oscar is at all times, so Carly should be willing to tell Kim if Josslyn won’t.

Of course, Carly’s got a secret of her own right now. Will she drop the baby bomb on Joss or wait until later? Either way, that’s going to come as a real shock! Next, Harmony (Inga Cadranel) will come all the way from Beechers Corners to give Shiloh Archer (Coby Ryan McLaughlin) a warning. She may have learned some new info that could put Shiloh’s secrets at risk.

Jason Morgan (Steve Burton) will offer Sam McCall (Kelly Monaco) a warning on Thursday as well. He’ll insist that Shiloh is even more of a threat than they thought, so he’ll be concerned about this trip she has planned with him. Sam will think she can handle herself, but you can bet this is going to spell trouble.