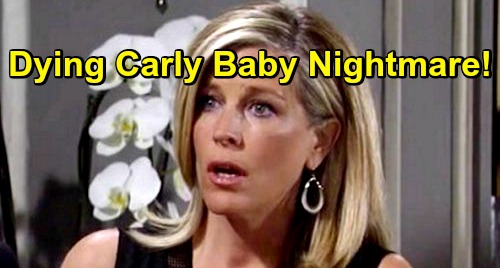 Of course, Sonny could also end up losing Dante Falconeri (Dominic Zamprogna). General Hospital spoilers say Dante is coming back, but his return won’t be permanent. That could mean GH plans to kill Dante off. If so, that’ll make Carly’s survival even more crucial. The deaths of two sons would be bad enough, but Sonny probably couldn’t handle losing Carly, too.

Sonny has mentioned his stroke concerns several times, including during Carly’s appointment with Dr. Kim Nero (Tamara Braun). Kim indicated that she didn’t see any need for alarm right now, but Carly will have to monitor her blood pressure closely and try to relax. Unfortunately, it’s tough to stay stress-free in Port Charles – especially when there’s a serial killer running around!

GH fans will recall that Carly made it on Ryan Chamberlain’s (Jon Lindstrom) hit list. Although Ryan hasn’t been able to knock Carly off it yet, he still might try! There’ll surely be at least one more murder attempt before this storyline concludes.

Even if Ryan focuses his efforts elsewhere, there’ll be other stressful situations for Carly. It’ll break her heart to watch Josslyn Jacks (Eden McCoy) go through the pain that’s ahead. Oscar Nero (Garren Stitt) will slowly fade away, so Joss’ pain could take a toll on her pregnant mother. Carly needs to be relaxing, but how can she do that when her daughter’s going to be such a mess?

The Jonah Corinthos secret still hangs over PC as well. Once the truth about “Wiley” Cooper-Jones inevitably blows up, Carly should get caught in the middle of that. Lucas Jones (Ryan Carnes) and Michael Corinthos (Chad Duell) are both victims of Brad Cooper’s (Parry Shen) deception.

We can’t forget about the danger that’s brewing for Jason Morgan (Steve Burton) either. General Hospital spoilers say Sam McCall (Kelly Monaco) will get stuck in a jam. The same goes for Kristina Corinthos-Davis (Lexi Ainsworth), so Jason will do his best to save the day. He’ll run into some Shiloh Archer (Coby Ryan McLaughlin) peril of his own, so there’s pretty much no way Carly can remain calm!

Between all the hints and the drama that’s looming, General Hospital has seemingly guaranteed that Carly will have a stroke and find herself near death. Sonny’s prediction will almost certainly become a reality. Will Carly’s ordeal be part of why Jasper “Jax” Jacks (Ingo Rademacher) returns to town? It’d be a great reunion strategy if that’s where GH wants to go with this.

Carly’s pregnancy may cause a nightmare for her family, but let’s hope they can lean on each other and get through the turmoil together. We’ll give you updates as other GH news comes in. Stick with the ABC soap and don’t forget to check CDL often for the latest General Hospital spoilers, updates and news.