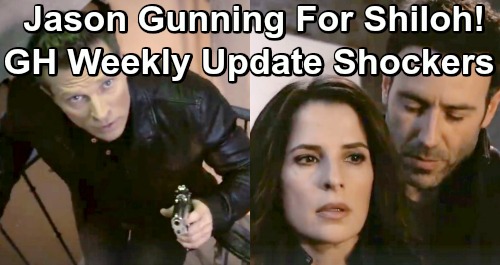 General Hospital spoilers and this week’s new promo video tease that it will be a week of shocking news, an evil plan, and a long-awaited reunion. Let’s start with the shocking news, which is Carly Corinthos (Laura Wright) and Sonny Corinthos (Maurice Benard) getting official confirmation from Dr. Kim Nero (Tamara Braun) that Carly is pregnant.

Of course, there may be more shocking news to come on Carly’s pregnancy. Carly had a high-risk pregnancy with Josslyn Jacks (Eden McCoy) and she could be in trouble for this pregnancy as well. Plus, Carly’s older now and that carries pregnancy risks, too. Sonny and Carly might have a decision to make about whether to continue with the pregnancy, given the significant risks to Carly’s health.

Next, the new GH weekly promo turns to the Shioh Archer (Coby Ryan McLaughlin) situation. Sam McCall (Kelly Monaco) and Jason Morgan (Steve Burton) are shown secretly discussing Shiloh, and Jason comments that “Shiloh is more of a threat than we thought.”

It seems that the evidence is mounting that Shiloh is a dangerous man with an evil plan. Damian Spinelli (Bradford Anderson) revealed evidence last week indicating that Shiloh may have killed his own father. Plus, Shiloh is acting more creepy around Sam and Kristna Corinthos-Davis (Lexi Ainsworth), and seeming more like a predator every day.

On that note, Shiloh is shown in the promo getting up close and personal with Sam and asking her to spend the night with him. Of course, Sam will have to delicately get out of that situation, so we’ll see how she handles that.

And then Jason is shown going up some stairs, perhaps to locate Sam and Shiloh, with his gun drawn. It certainly looks like danger is in the air for Sam and Jason as they try to get to the bottom of Shiloh’s master plan.

Finally, the new GH promo shows Laura Webber (Genie Francis) taking in an unbelievable sight…her husband Kevin Collins (Jon Lindstrom) as a “patient” at Ferncliff. A bewildered Laura exclaims “it can’t be” as she spots a captive Kevin in his room.

But danger will be in store for Laura, as Ryan Chamberlain (Jon Lindstrom) will discover that Laura followed him to Ferncliff and has discovered her beloved Kevin being held captive. According to GH spoilers, Ryan will act fast and capture Laura as well. It seems that Ryan will succeed in holding both Laura and Kevin together, and the two will try to fight their way out of captivity.