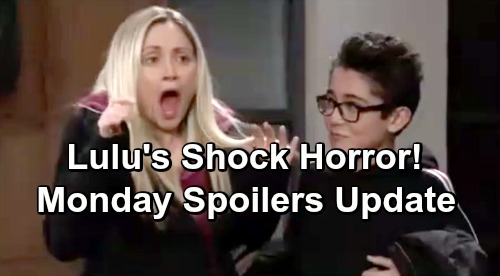 General Hospital (GH) spoilers for Monday, February 18, tease that Ryan Chamberlain (Jon Lindstrom) will unleash his wrath. He just determined that Dr. Kevin Collins (Jon Lindstrom) must’ve lied about the prenup. Ryan also assumes that Laura Webber (Genie Francis) is now more suspicious than ever, so his worries are piling up.

GH fans can expect a fierce faceoff between Kevin and Ryan. While the twins lash out at each other, Laura will sneak in Ferncliff right behind Ryan. She’ll tell someone that time is of the essence as she tries to get to the bottom of all this. General Hospital spoilers say Laura will eventually approach Kevin’s room. He’ll sense that Laura’s drawing near, even without being able to see her.

Laura will try to rescue Kevin, but she’ll get caught in the same predicament. Ryan will gain another captive soon, so this is turning into an even bigger mess! Meanwhile, Franco Baldwin (Roger Howarth) will explode at Jordan Ashford (Briana Nicole Henry). He’ll insist that he’s not going to admit to killing Kiki Jerome (Hayley Erin).

Franco will understand that Jordan wants to bring the real killer out in the open. He has the power to help, but confessing to Kiki’s murder is awfully extreme. Franco loved Kiki with all his heart, so the thought of saying he killed her will make him sick.

Nevertheless, Jordan will remind Franco that they both want justice as well as protection for the rest of Port Charles. This is Franco’s shot at doing something good. He’ll almost be convinced until Jordan insists no one else can know about this.

Their phony confession plan will have to stay between them. Since Franco won’t be able to tell Elizabeth Webber (Rebecca Herbst), he’ll be incredibly torn.

General Hospital spoilers say Franco will finally go along for the ride, but he’ll run into major trouble thanks to that decision. Over with Nina Reeves (Michelle Stafford) and Charlotte Cassadine (Scarlett Fernandez), they’ll welcome Lulu Falconeri (Emme Rylan) home from GH. Unfortunately, Lulu will be just a bit too surprised!

When Charlotte and Nina appear, they’ll shout as they hold a sign and balloons. Lulu will lurch backward as she clutches her chest. She’s still recovering from a near death experience, so maybe Nina and Charlotte’s plan wasn’t the best idea. Fortunately, Lulu will calm down and express gratitude for the effort.

Charlotte will also needle Spencer Cassadine (Nicolas Bechtel) about the election tampering on Monday. He’ll continue to face stress over his illegal actions. Across town, Alexis Davis (Nancy Lee Grahn) will have an uncomfortable encounter with Dr. Neil Byrne (Joe Flanigan). Since PC residents have a way of running into each other, Alexis had better get used to the awkwardness!

Dr. Kim Nero (Tamara Braun) will meet up with Alexis as well, so they’ll have a chance to discuss Oscar Nero’s (Garren Stitt) condition. Alexis will undoubtedly be happy about Oscar’s reprieve. It doesn’t change Oscar’s grim fate, but more time with his loved ones means the world.

Other General Hospital spoilers say Harrison Chase (Josh Swickard) will notice Willow Tait’s (Katelyn MacMullen) strange behavior. He’ll feel like there must be some issue between Willow and Brad Cooper (Parry Shen). Willow will likely try to throw Chase off the trail, but that could get tougher as time goes on.

General Hospital viewers will see things get quite complicated for Willow in the coming weeks. We’ll give you updates as other GH news emerges. Stick with the ABC soap and don’t forget to check CDL often for the latest General Hospital spoilers, updates and news.