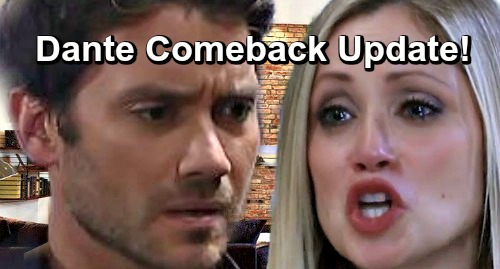 General Hospital (GH) spoilers tease that we’ve some important updates on what’s ahead for Dante Falconeri (Dominic Zamprogna). Ever since Zamprogna’s comeback was confirmed, GH fans have been buzzing about what the future holds. Sonny Corinthos (Maurice Benard) is currently trying to find his missing son in Turkey, so a dangerous adventure’s in store for both of them.

In the latest issue of Soap Opera Digest, Zamprogna offered a few hints about Dante’s next stint. It turns out he’s filmed four episodes so far and there are more to come. Zamprogna has plans to make another trip to the GH studio and keep this storyline going strong. It sounds something General Hospital’s going to take their time with.

There’s no need to rush Dante’s journey along, especially since Zamprogna just isn’t interested in a long-term return right now. GH has to work with what he’s willing to give them, so it’s good that they’re going to let this play out slowly. This could easily set up Dante’s permanent exit, which is why viewers will want to savor every last second of the action.

As for the story itself, some of the details were tossed around at the GH Christmas party. Zamprogna attended the event along with Frank Valentini, General Hospital’s executive producer. He was able to weigh in on this hot plot and what direction he wanted it to take. Zamprogna insisted that he was thrilled to be back on set. He’s glad to be taking part in this special Dante-centric storyline.

Obviously, GH wants to keep a tight lid on Dante’s fate and how Lulu Falconeri (Emme Rylan) fits in all this. They don’t want to give away any big surprises that might delight fans or even break their hearts. Zamprogna couldn’t reveal too much, but he’s eager for viewers to see what’s cooking.

How do you think the show will ultimately wrap all this up? Will Dante die or split from Lulu? General Hospital spoilers say those still seem like the only options, so stay tuned for more drama. We’ll keep you posted as other GH news comes in. Stick with the ABC soap and don’t forget to check CDL often for the latest General Hospital spoilers, updates and news.