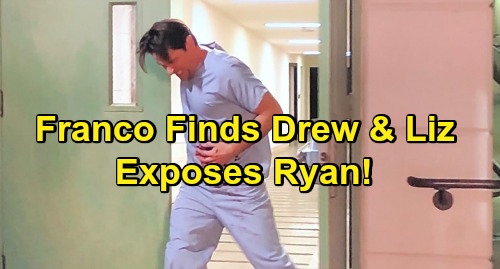 General Hospital (GH) spoilers tease that Franco Baldwin (Roger Howarth) will manage to pull off the impossible. After getting stabbed by Ryan Chamberlain (Jon Lindstrom) and escaping from Ferncliff, Franco will somehow make it home to Elizabeth Webber (Rebecca Herbst). Liz and Drew Cain (Billy Miller) will be floored when a bloody Franco appears at the door and staggers in with huge news.

It’s doubtful Franco could make it that far on foot, so maybe he’ll find a sympathetic hitchhiker. We sure wouldn’t want to pick up a bleeding, notorious killer who just escaped from a mental institution for the criminally insane. However, Franco might stumble across someone who doesn’t recognize him and is willing to help.

Of course, GH may just go with the never mentioned but often used method of soap teleporting. Port Charles residents always make it across town faster than the speed of light. Whatever the case, the point is Franco will make it home to tell Liz the truth. He’ll be glad Drew’s there to hear it as well. 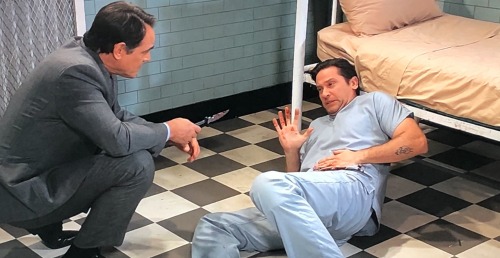 General Hospital spoilers say Franco will reveal that Ryan is alive and is behind the murders. He won’t have enough strength to share much else, but that’ll be enough. Drew and Liz have already been doubting Franco’s guilt, so they’ll be relieved to be proven right.

Deep down, they had to know Franco couldn’t kill Kiki Jerome (Hayley Erin) – or even any of the other victims. Without that tumor, Franco isn’t the dark man he once was. Once Elizabeth and Drew hear what Franco has to spill, they’ll face another shocker. General Hospital spoilers state that Franco will collapse right in front of them, so they’ll call paramedics and get some medical assistance ASAP.

Franco will be rushed to GH, where he’ll land in critical condition. Things could get dicey for a while, but Franco will ultimately pull through. After Franco is awake and on the road to recovery, Liz will want more answers. She won’t get why Franco would enter a guilty plea and confess on live TV. Liz will need Franco to help her understand how that could possibly help his situation.

General Hospital spoilers say Franco will apologize for leaving Elizabeth out of the loop. He’ll point to pressure from Jordan Ashford (Briana Nicole Henry) and reveal their sneaky plan. Liz will at least be able to make sense of all this, but she’ll find it tough to get past. They promised not to keep secrets from each other, so Liz’s trust will be shaken a bit.

Fortunately, Franco and Liz’s love for each other is strong. “Friz” fans have faith that they can overcome this obstacle and whatever else life throws their way. We’ll give you updates as other GH details emerge. Stay tuned to the ABC soap and don’t forget to check CDL often for the latest General Hospital spoilers, updates and news.