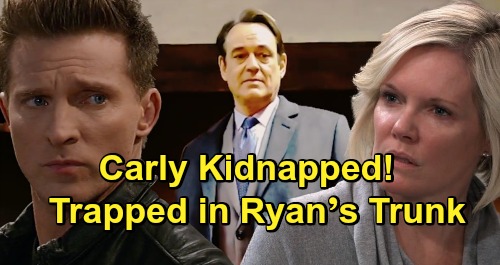 General Hospital (GH) spoilers tease that Ryan Chamberlain (Jon Lindstrom) will be backed into a corner. On Thursday’s new GH episode, February 28, Ryan stabs Franco Baldwin (Roger Howarth) and plans to finish him off. However, things don’t go down that way. Franco is able to make a break for it, so Ryan will soon know he’s in deep trouble.

Of course, Ryan will hope he did enough damage to bleeding Franco. He’ll count on Franco dying before he spills the truth, but he’ll have to know exposure is a possibility. As a result, Ryan will carry out some chilling steps. Unfortunately, it appears Carly Corinthos (Laura Wright) will show up and hinder his plot. 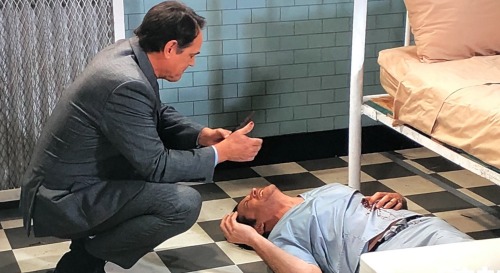 Since Ryan knows how to roll with the punches, he’ll decide Carly can just come along for the ride. General Hospital spoilers say Ryan will kidnap Carly. He’ll stash her in the trunk of his car before whisking Ava Jerome (Maura West) away on their next adventure. Ryan will convince Ava to become his bride as soon as possible, so they’ll head to Niagara Falls to elope.

Poor Carly will be trapped while an oblivious Ava gears up to tie the knot. They’ll hit the road while Carly faces this horrible trauma. For a pregnant woman who’s supposed to be avoiding stress, Carly’s already dealing with a whole lot of it! Alas, that won’t change anytime soon. This situation is sure to get worse before it gets better.

Jason Morgan (Steve Burton) will get in on the action eventually. After he spots Carly’s cell phone in the GH parking lot, he’ll fear the worst. Jason has great instincts, so he’ll know Carly could be in a tight spot. A shocking series of events will lead Jason to the truth about “Dr. Kevin Collins.” He’ll be in a race against time, but that’s a battle he’ll lose – at least at first.

Naturally, Jason won’t stop trying to help his best friend. It looks like he’ll put the clues together and realize Carly is most likely in Ryan’s car. Jason will probably discover their chosen destination as well, so he should be the next Port Charles resident to take a Niagara Falls trip.