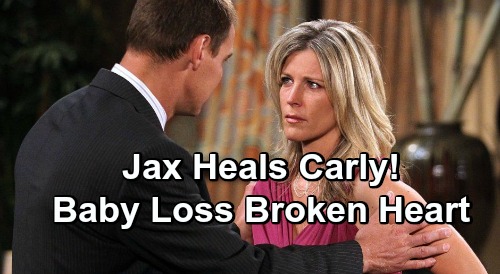 General Hospital (GH) spoilers tease that Carly Corinthos (Laura Wright) has some danger headed her way. Curiosity may have killed the cat, but what about Carly? She’ll undoubtedly survive Ryan Chamberlain’s (Jon Lindstrom) deadly plan, but her baby may not be so lucky.

Carly is certainly too nosy for her own good. She just can’t let go of this Ferncliff mystery patient, which could leave lives on the line – both hers and her unborn child’s. That brings us to an important question. Why did GH decide to make Carly pregnant out of the blue?

Let’s face it: No one asked for this. There might be some loyal CarSon fans who loved the twist, but it’s not like anybody was begging for another little Corinthos. It was a bizarre story choice, so there has to be a reason behind it. We’d say it’s more than just a curveball for Carly and Sonny Corinthos (Maurice Benard) to deal with.

Did GH give Carly this baby just so she could lose it? General Hospital may be setting up some serious issues for CarSon to overcome. Maybe the show has the next Sonny and Carly split planned. Losing this child that Carly’s excited about would be a crushing blow. For a couple that’s already faced so much heartache, a loss like this would be even more painful.

Carly and Sonny might be brought back to that time of intense grief over Morgan Corinthos’ (Bryan Craig) demise. Unfortunately, Morgan and the baby may not be the only deaths they have to cope with. Dante Falconeri (Dominic Zamprogna) is returning to GH, but not indefinitely. It seems Dante will simply be back to wrap things up for his character, so a grim fate is a possibility.

Can Sonny and Carly handle losing Morgan, the baby AND Dante? That’s three difficult losses in their family unit, so it could be tough to survive all the mourning. Carly and Sonny may end up looking for an escape – perhaps in someone else’s arms.

Margaux Dawson (Elizabeth Hendrickson) is always an option for Sonny. Since Jasper “Jax” Jacks (Ingo Rademacher) is making a comeback, he could reunite with Carly. General Hospital spoilers say Carly and Sonny would probably get back together sooner or later, but drama could tear them apart in the meantime. It might be nice to shake things up for a while anyway.

Do you think CarSon is on the verge of destruction? Is that why Jax is headed back to General Hospital? We’ll give you updates as other GH news comes in. Stay tuned to the ABC soap and don’t forget to check CDL often for the latest General Hospital spoilers, updates and news.