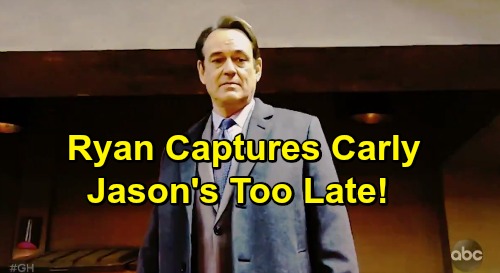 General Hospital (GH) spoilers tease that Carly Corinthos (Laura Wright) won’t follow Dr. Kim Nero’s (Tamara Braun) orders. She’s been told to take it easy, but that can’t happen when there’s a mystery to solve. Carly has been stuck on this secret Ferncliff patient for months. She knows the man is checked in under the name “Wilson Ritter,” but that’s about all Carly has to go on at this point.

However, it looks like more clues will land in Carly’s lap soon. Her interest in this mystery will rev up again, which will definitely lead to danger. The good news is Jason Morgan (Steve Burton) is in the loop on Carly’s pregnancy. He also knows Sonny Corinthos (Maurice Benard) is gone, so he’ll want to keep a closer eye on Carly than usual. The bad news is Jason’s got a lot on his plate.

Jason is working with Sam McCall (Kelly Monaco) on a plot to dupe Shiloh Archer (Coby Ryan McLaughlin). He’ll want to make sure Sam and Kristina Corinthos-Davis (Lexi Ainsworth) stay safe as well, so Carly may slip through the cracks briefly. General Hospital spoilers say Jason will be unsettled during the week of March 4-8. He’ll feel like something just isn’t right.

Jason will end up seeking out Julian Jerome (William deVry), which could indicate that he wants to talk about Ava Jerome (Maura West) and her relationship. Will Jason figure out that “Dr. Kevin Collins” aka Ryan Chamberlain (Jon Lindstrom) is the real killer? Even if he doesn’t know the Ryan part, he could still think Kevin has had another psychotic break.

Regardless, General Hospital spoilers say Jason will get some updates that leave him rattled. On March 6, Jason will be frantic as he searches for Carly. It sounds like he’ll be desperate to prevent “Kevin’s” next move. Sadly, GH fans can expect Jason to be too late! He’ll just miss Carly, so she may confront Ryan and get herself kidnapped or attacked.

General Hospital’s weekly promo shows Carly watching Ryan shut the trunk of a car. She’ll look smug like she’s caught him red-handed, but she won’t realize who she’s dealing with! Ryan is a vicious criminal mastermind. He won’t hesitate to kill Carly and her unborn child if he has to.

Of course, there’s been no buzz about Laura Wright leaving the show. Carly should survive whatever Ryan has in store, but there’s no guarantee her baby will. Nevertheless, Jason will keep fighting for his bestie and her family.

Sonny will receive a troubling message eventually, so Jason might get in touch with him about the peril Carly’s facing. There won’t be much Sonny can do from Turkey, but he at least needs to know. General Hospital spoilers say Carly’s crisis will bring a big mess for the Corinthos clan!

It sounds like the excitement’s building in this shocking storyline. We’ll keep you posted as other GH details emerge. Stick with the ABC soap and don’t forget to check CDL often for the latest General Hospital spoilers, updates and news.