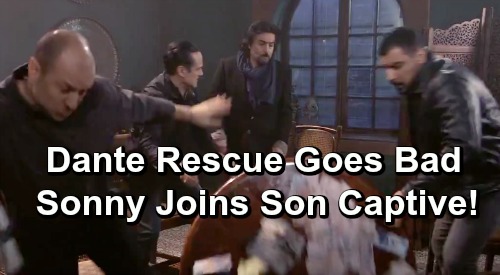 General Hospital (GH) spoilers tease that Sonny Corinthos (Maurice Benard) will make some desperate moves in Turkey. He recently dashed off to find Dante Falconeri (Dominic Zamprogna), so Carly Corinthos (Laura Wright) passed along the news to Jason Morgan (Steve Burton). Naturally, Jason grew concerned. It’s not the best idea for Sonny to tackle this task without the proper backup.

Jason offered to help, but Carly wants Jason to stay put after his latest ordeal. Besides, Carly argued that Sonny needed to be the one to bring Dante home. They’ll just have to trust that Sonny knows what he’s doing and can make this rescue happen. Unfortunately, big trouble’s brewing later this week. It won’t be long until Sonny gets on the bad side of the baddies!

GH fans can expect a poker game to go awry. Sonny will end up flipping the table over, so he may be frustrated by the lack of info. The thugs involved won’t be pleased about Sonny’s interference. A major brawl could be coming up, but Sonny will surely put up a good fight. He’ll remain determined to get Dante out of whatever danger he’s landed in.

Of course, Sonny could land in some danger of his own. General Hospital spoilers suggest that Dante will be held prisoner in this storyline, so Sonny could easily join his captive son. They may have to work together on an escape scheme. It’d be great to watch Sonny and Dante share a warm reunion before strategizing.

However, General Hospital spoilers say a getaway plan won’t be easy to pull off. It looks like Robert Scorpio (Tristan Rogers) may have to step up to help. Lulu Falconeri (Emme Rylan) would undoubtedly appreciate that. The same goes for Carly, who’s pregnant and doesn’t need this kind of stress right now.

GH viewers won’t want to miss the next chapter of this hot plot. Will Dante actually make home for a reunion with Lulu? Dominic Zamprogna’s return won’t be permanent, so there are no guarantees about what the future holds. A deadly outcome is always an option.