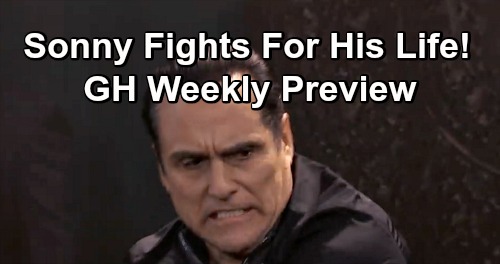 General Hospital’s new GH weekly promo video for February 25 to March 1 teases that it’s the beginning of the end this week in Port Charles, with one stunner after another. The first stunner of the week concerns Sam McCall (Kelly Monaco) and Jason Morgan (Steve Burton). Of course, Jason collapsed and was stricken with blindness as he was trailing Sam and Shiloh Archer (Coby Ryan McLaughlin) at the tower.

The promo shows Jason in the hospital, with Sam hauling off and slapping him with Shiloh watching in the wings. It looks like the slap is just part of the ruse to keep Shiloh thinking that Sam and Jason aren’t together. Sam’s probably feigning anger that Jason was following her. Still, it’s quite an intense moment for JaSam!

The promo also shows Lulu Falconeri (Emme Rylan) and Peter August (Wes Ramsey) having a chat at Ferncliff. It looks like they may set out to talk to Franco Baldwin (Roger Howarth) about his murder/assault confession, or perhaps they are there for Franco’s tell-all interview, since part of Jordan Ashford’s (Briana Nicole Henry) plan for Franco was to give an interview to the Invader.

Something about the whole situation won’t feel right to Lulu, who tells Peter that “something feels off.” Of course, Lulu’s got the memories of what really happened on the night of her attack buried deep within her mind, so at some level Franco’s version of events may be bothering her.

Speaking of Franco, he’s shown in the promo conferring with Ryan Chamberlain (Jon Lindstrom) in his room at Ferncliff. “This situation is going to kill me,” he tells Ryan, whom he believes is his friend and ally. However, it looks like Ryan will later be upset with Franco, perhaps after stealing his glory with the tell-all interview. Ryan is shown with his hand on Franco, and Franco looking distressed. Franco could be in real danger!

Meanwhile, Sonny Corinthos (Maurice Benard) is shown at what looks to be a poker game with some thugs, but things aren’t going so well. This likely has to do with Sonny’s attempt to find Dante Falconeri (Dominick Zamprogna) in Turkey.  Sonny suddenly overturns the table in anger, likely putting himself in grave danger.

Finally, the new GH promo promises a shocking final five minutes at week’s end, and it all has to do with Ryan. Felicia Scorpio (Kristina Wagner) and Mac Scorpio (John J. York) are back on the scene, and Lucy Coe (Lynn Herring) is shown dropping a bin in surprise at something Felicia and Mac are saying. Could it be speculation about the serial killings?

It certainly seems like a big revelation is coming with respect to Ryan and his involvement in the serial killings. Ryan is shown in the promo looking ominously down on someone or something, and in a quick scene he’s shown shutting what appears to be the trunk of a car with Carly Corinthos (Laura Wright) watching in the background. Could Carly be in danger?

The promo ends with a focus on Laura Webber (Genie Francis) and Kevin Collins (Jon Lindstrom), still in captivity in the Ferncliff basement. They may have some clue as to what Ryan’s big plan is, as Laura says, “Oh my God.”