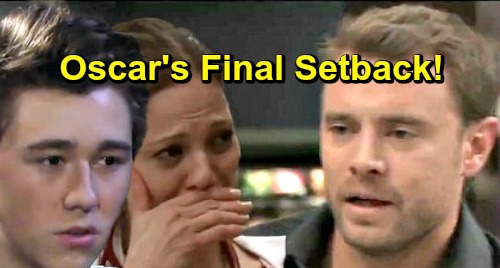 General Hospital (GH) spoilers tease that Elizabeth Webber (Rebecca Herbst) will find herself waiting on March 4. Perhaps this has something to do with Cameron Webber’s (William Lipton) ill-advised plans. Carly Corinthos (Laura Wright) wasn’t too keen on Josslyn Jacks’ (Eden McCoy) Niagara Falls idea. She offered a chaperoned alternative, but Joss balked at the suggestion.

Naturally, Josslyn would much rather on a risky adventure with just her friends. You’d think Josslyn would’ve learned something after all the catacombs chaos, but soap teens will be soap teens! They always find ways to put themselves in danger and cause problems for their parents.

Liz may worry if night falls and Cam is still nowhere to be found. The teens agreed to come back before dark, but they may get held up and miss their chance. General Hospital spoilers say Dr. Kim Nero (Tamara Braun) will get a disturbing call on March 5. Once she picks up the phone, some alarming news will be shared on the other end.

Will Oscar have a seizure while the teens are out of town? Will things suddenly get dire despite the temporary reprieve? Oscar’s tumor could obviously start growing again at any time. Plus, it’s already quite large. The tumor’s affected Oscar through these seizures several times, so he could have another one soon. Oscar’s health could take a serious hit at the worst possible moment.

A car crash is also possible – although Drew Cain’s (Billy Miller) recent accident may make that less likely. GH probably doesn’t want to get too repetitive with vehicle predicaments. On March 5, General Hospital spoilers say Cameron will be on the hot seat. He may face backlash for driving Oscar, Joss and Trina (Sydney Mikalya) without permission.

Cam may be blamed if Oscar can’t get to GH fast enough. Oscar might not wake up as quickly as he usually does after a seizure. That could prompt major fears for Josslyn, Kim and Drew. General Hospital spoilers suggest that Oscar will live for a while longer, but this could still cause a serious health setback. It could kick off the final chapter for Oscar as he begins his march toward death.

Some tough moments are coming up for Oscar’s friends and family members. We’ll give you updates as other GH details emerge. Stay tuned to the ABC soap and don’t forget to check CDL often for the latest General Hospital spoilers, updates and news.