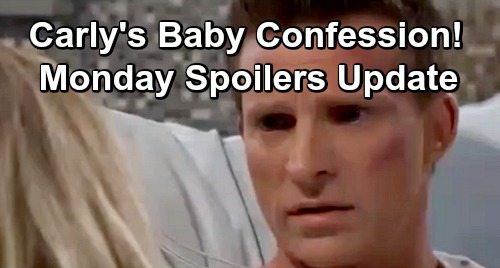 General Hospital (GH) spoilers update for Monday, February 25, tease that Nina Reeves (Michelle Stafford) will hope to extend Sasha Gilmore’s (Sofia Mattsson) visit. She’d love to have her “daughter” in Port Charles permanently, but she’d settle for having Sasha around until the wedding. Nina intends to remarry Valentin Cassadine (James Patrick Stuart), so she’s eager to have Sasha there to watch.

Sasha knows it’s risky to spend too much time with Nina, but she really enjoys being around her. She’ll find it tough to disappoint her fake mom, so it seems her stint in PC will get longer. Meanwhile, Maxie Jones (Kirsten Storms) will hold Valentin’s fate in her hands. She’ll get the DNA test results back for Sasha, which means she could open them and blow the lid off Valentin’s scheme.

Over with Peter August (Wes Ramsey), he’ll be annoyed when Valentin pushes for another favor. How many could more could he possibly need?! Still, Valentin will really hope Peter can come through for him again. He might argue that Peter needs to steer Maxie away from Sasha. Valentin will do whatever he can to prevent the fake daughter secret from getting out.

However, there’s no guarantee Peter will cooperate this time, especially when he knows Sasha may be a fraud. As for Maxie, she’ll remain torn over whether she should learn the truth and potentially destroy Nina’s happiness. It won’t be an easy choice, but Maxie will have to make it anyway.

Elsewhere, Shiloh Archer (Coby Ryan McLaughlin) will suspect Sam McCall (Kelly Monaco) has been scheming. He thought they were going off on their tower adventure alone, so he won’t be pleased that Jason Morgan (Steve Burton) followed them and derailed it. Shiloh will pretend everything’s fine, but he’ll be agitated under the surface.

Sam will be pretty flustered thanks to Jason’s ordeal. She may sidestep Shiloh’s questions as best as she can and return her attention to her blind beau. Once Jason lands in a GH room, Carly Corinthos (Laura Wright) will get updates and sit by his bedside. She’ll be glad Jason is OK, but he’ll sense that something’s up with her.

General Hospital spoilers say Carly will come clean about her pregnancy. Her emotions will pour out as she shares her fears, doubts and even her joy. This baby has thrown Carly for a loop, but she’ll still feel like this could be a real blessing for their family.

While Jason reassures Carly, Drew will be brought up to speed on his own accident. He’ll wonder if he accidentally harmed anyone with his car. Sadly, blind Drew ran over Jordan Ashford (Briana Nicole Henry) in the parking garage, so she’ll be in bad shape. General Hospital spoilers say Curtis Ashford (Donnell Turner) will want answers about his wife’s health, but the doctors won’t be quick to offer it.

Stella Henry (Vernee Watson) will give Curtis a pep talk and hope that he can keep his spirits up. It’s important to stay strong for Jordan right now. Over with Dr. Arthur Cabot (Time Winters), he’ll face Anna Devane’s (Finola Hughes) questions about her memories. Which ones are Anna’s and which ones might be her sister’s?

It appears some of Alex Devane Marick’s (Finola Hughes) memories were indeed given to her twin, so Anna will be left reeling. There’s a good chance Anna was mistaken about giving birth to Peter. General Hospital spoilers hint that Alex brought Peter into this world instead, so that’ll be a crushing blow when the time comes.

GH fans won’t want to miss the twists and turns ahead. We’ll keep you posted as other news comes in. Stick with the ABC soap and don’t forget to check CDL often for the latest General Hospital spoilers, updates and news.