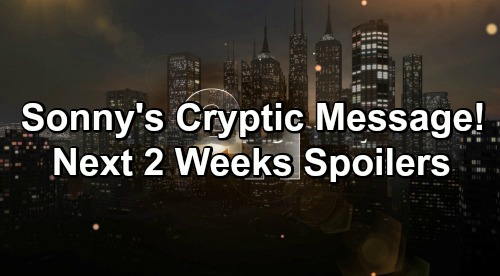 General Hospital (GH) spoilers for the next two weeks tease that more serial killer chaos is on the way. During the week of February 25-March 1, Franco Baldwin (Roger Howarth) will move forward alone. Jordan Ashford (Briana Nicole Henry) won’t be able to help Franco since she’ll be busy fighting for her life at GH. Franco will stick to the plan and hope he can draw the real murderer out of hiding.

As part of that plan, Franco will meet with Lulu Falconeri (Emme Rylan) for an interview. He’ll insist that he wants to share his thought process, so he may have to rely on old memories. Franco could let his mind sink back into that dark place with a goal in mind. He’ll have to sell the idea that he’s truly filled with pride over these murders. Franco will suggest that his brilliance was on full display.

Ryan Chamberlain (Jon Lindstrom) will fume as he watches Franco take credit for his work. To make matters worse, Ava Jerome (Maura West) will comment on Franco’s deadly artistry. She’ll contend that Franco’s wicked brain is really something. Ava won’t mean it as a compliment, but Ryan still won’t like it. He’ll feel like Franco is trying to outshine his murderous talents.

While Ryan plots his next move, Anna Devane (Finola Hughes) will corner Peter August (Wes Ramsey) and demand some answers. Peter had ties to the memory-mapping study, so Anna may want to know if he’s been holding out on her.

However, Peter once suggested that if Robert Scorpio (Tristan Rogers) wanted the names of patients 1-5, he’d have to talk to Dr. Klein. It doesn’t look like Peter was in the loop on much. Based on his initial reaction to Anna, he definitely believes she’s his real mother. Of course, Alex Devane Marick (Finola Hughes) is likely the one who gave birth to Peter. Anna may become suspicious of that soon.

During the week of March 4-8, Laura Webber (Genie Francis) and Dr. Kevin Collins (Jon Lindstrom) will come up with a plan. They’ll hope they can escape from Ferncliff, but it’s not going to be an easy task. Kevin will do his best to think of all the little details that could trip them up. He’ll just want to be certain they’re ready.

Elsewhere, Curtis Ashford (Donnell Turner) will offer some devastating news. Will Jordan still be in dire condition by then? Her prognosis could be quite grim. Regardless, T.J. Ashford (Tajh Bellows) will hope he can pitch in on anything Curtis might need, even if it’s just a hug and support.

Other General Hospital spoilers say Sonny Corinthos (Maurice Benard) will get a strange message. It’ll contain a cryptic warning that leaves Sonny disturbed, which could involve Dante Falconeri (Dominic Zamprogna). Drew Cain (Billy Miller) will receive a weird message of his own, although two stories don’t appear to be connected. GH fans can expect Drew to follow up on a text and try to get more info.

Kristina Corinthos-Davis (Lexi Ainsworth) will once again become Shiloh Archer’s (Coby Ryan McLaughlin) pet. He’ll pull back from Sam McCall (Kelly Monaco) and concentrate on her truly vulnerable sister. Across town, it sounds like Elizabeth Webber (Rebecca Herbst) will learn the truth about Franco’s plan with Jordan. Sadly, she may push Franco away for now. Liz might even consider an annulment.

Franco still kept secrets when they promised each other they wouldn’t. General Hospital spoilers say Liz will have a lot to mull over before she can get past all this. It also seems Lulu Falconeri (Emme Rylan) will experience total recall when it comes to the attack. Alas, Ava Jerome (Maura West) will already be headed out of Port Charles for her future with Ryan.

The next two weeks are sure to be packed with action. We’ll give you updates as other GH details emerge. Stay tuned to the ABC soap and don’t forget to check CDL often for the latest General Hospital spoilers, updates and news.