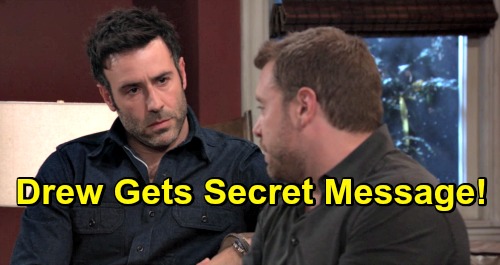 General Hospital (GH) spoilers tease that Drew Cain (Billy Miller) will be let in on a shocking secret. On the new GH episode Tuesday, February 26, Drew will receive a message meant just for him. It sounds like this special info will have to be kept on the down low, so it should be interesting to see who this message is from and what it involves.

GH loves overlapping storylines, which could be what they’re doing here. General Hospital spoilers remind us that currently blind Drew has become part of the mystery virus storyline with Anna Devane (Finola Hughes). General Hospital buzz suggests that Shiloh was involved in getting Drew into the memory mapping experiment – and not as a volunteer!

That hot plot should tie in with Drew Cain’s (Billy Miller) buried memories. There are undoubtedly some crucial facts that he can’t remember, so some of them could be linked to this twin drama.

Of course, all of this could connect to Shiloh Archer (Coby Ryan McLaughlin) as well. We know that Shiloh confessed some things he wished he wouldn’t have once upon a time. Will the top-secret message Drew receives somehow be associated with Shiloh?

Even if Shiloh doesn’t have a hand in it, perhaps an old enemy of Shiloh will reach out. He seems like the kind of guy who would have plenty of adversaries. Shiloh’s nice guy act isn’t fooling Drew, Jason Morgan (Steve Burton) or Sam McCall (Kelly Monaco). He may have his followers convinced that he’s some type of saint, but Drew and the others are onto him.

Drew might get a message that lets him know his memories are vital. He could face a difficult choice as the danger intensifies for his loved ones. After Drew inevitably loses Oscar Nero (Garren Stitt) to his brain tumor, it could make this distraught dad determined not to lose anyone else.

Sam and Kristina Corinthos-Davis (Lexi Ainsworth) are at risk, so Drew may have no choice but to go for the memory procedure. It’d be worth it if he could remember something to protect them. Saving lives is what really matters here. There’d surely be a way for Drew to recall his newer memories eventually. General Hospital is great about providing those soapy solutions!

Whatever the case, Drew’s message should kick off an exciting new phase of a juicy crossover story. We’ll give you updates as other GH news comes in. Stay tuned to the ABC soap and don’t forget to check CDL often for the latest General Hospital spoilers, updates and news.