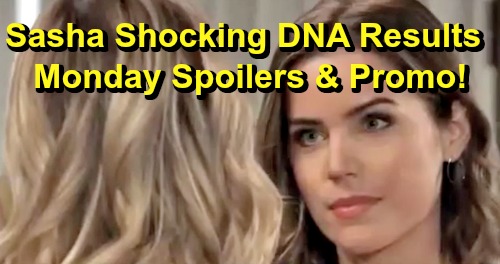 General Hospital (GH) spoilers for Monday, February 25, tease that Drew Cain (Billy Miller) will be hospitalized after that shocker in the parking garage. He suddenly battled an intense headache and went blind, so he’ll be confused when he wakes up. Once Drew gets set up in a room and learns what happened, he’ll wonder if he hit anybody with his car.

Sadly, Drew just mowed down the police commissioner! Jordan Ashford (Briana Nicole Henry) will be in critical condition following the accident, so Curtis Ashford (Donnell Turner) will rush right over. He’ll grow frustrated when the doctors refuse to give him much information.

Stella Henry (Vernee Watson) will urge Curtis to keep hope alive and have faith that Jordan can get through this. She’s had her fair share of issues with Jordan, but she certainly doesn’t want her to face a grim fate. Stella will argue that Jordan’s got a lot of fight left in her, so Curtis will put his trust in that.

Elsewhere, Anna Devane (Finola Hughes) will try to figure out if Alex Devane Marick’s (Finola Hughes) memories were transferred to her. She recently realized that Dr. Arthur Cabot’s work must’ve been continued by Andre Maddox (Anthony Montgomery). Anna will have a few more questions for Dr. Cabot on Monday. She’ll be concerned about what’s real and what’s just been planted in her mind.

General Hospital spoilers say Peter August (Wes Ramsey) is likely Alex’s son instead of Anna’s. It may take some work to determine that, but Anna seems to be on the verge of finding out. Meanwhile, Maxie Jones (Kirsten Storms) will finally get the DNA results she’s been waiting for. She’ll have a chance to learn the truth about Sasha Gilmore (Sofia Mattsson), but will she take it?

Maxie hates the idea of blowing up Nina Reeves’ (Michelle Stafford) world. Nina believes Sasha is her daughter, so part of Maxie thinks maybe that’s good enough. However, another part of her hates that Valentin Cassadine (James Patrick Stuart) is still manipulating Nina.

Maxie will have a huge decision to make when it comes to opening up the explosive results. Once she knows what’s inside, there’ll be no turning back. Will Maxie’s desire to protect Nina from Valentin win out? It’s tough to say since Valentin will ask Peter for another favor on Monday’s new GH episode, February 25. Valentin knows that Peter can influence Maxie, so he may want Peter to intervene and convince Maxie to back off.

Over with Sasha, she’ll get some encouragement from her fake mom. Nina will push Sasha to stay in Port Charles until her upcoming wedding. She’ll really want Sasha to be there on her big day, so how can Sasha say no? General Hospital spoilers say Sasha will likely agree, but sticking around could be a massive mistake.

Next, Sam McCall (Kelly Monaco) will be worried about Jason Morgan (Steve Burton). He just tumbled down the tower’s staircase after going blind, so Sam will be a bit of a mess. Shiloh Archer (Coby Ryan McLaughlin) will be more concerned about why Jason was there at all. He’ll question Sam about why she told Jason their plans, so she’ll have to think fast and come up with an excuse.

Of course, Jason’s health will be the priority. He’ll be rushed to GH, where Carly Corinthos (Laura Wright) will promptly arrive to check on him. During their chat, Carly will get emotional and reveal her baby bombshell. She’ll tell Jason she’s pregnant, so he’ll offer support and some congratulatory words.