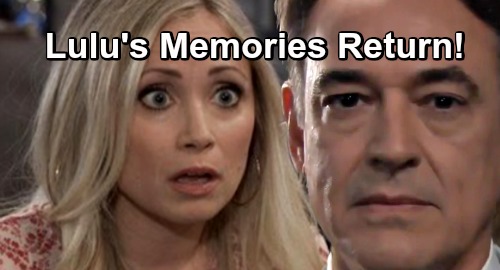 General Hospital (GH) spoilers tease that Lulu Falconeri (Emme Rylan) will continue to wonder what she’s missing. After she heard Franco Baldwin (Roger Howarth) plead guilty to all charges, Lulu was thrown for a loop. She feels like something’s up, but she doesn’t know what just yet.

However, Lulu did experience a strange memory flash that could help. She’s frustrated since she believes she can remember the attack itself and not the whole encounter. More flashbacks could fill in the gaps soon. There’s a good chance Lulu will slowly put this puzzle together.

If Lulu allowed “Dr. Kevin Collins” to hypnotize her again, he would undoubtedly add to the confusion by planting even more false memories. Thankfully, Lulu may try to remember on her own. Peter August (Wes Ramsey) wants Lulu to take it easy, but she’s ready to start writing. The story Lulu’s working on could put her on the path to the truth.

Lulu will eventually interview Franco, which should contribute to her baffled state of mind initially. GH fans know she hasn’t been an investigative journalist all that long, but she’s got a nose for news. Lulu can tell when the story doesn’t quite fit, so that should be the case once Franco spills his tale.

On March 6, General Hospital spoilers say Lulu will reconcile her memories. There are a couple of different options here. It’s possible Lulu will realize her false memories don’t line up with the info on her computer. Lulu noticed a victim number discrepancy just before she was attacked, so that could help her remember Ryan Chamberlain’s (Jon Lindstrom) arrival and taunting.

It’s also possible that the rest of Lulu’s memories will come flooding back. That may help her settle what’s real and what’s not. Once she recalls that “Dr. Kevin Collins” showed up and revealed himself as Ryan, she’ll know he manipulated her later. Lulu will realize Franco wasn’t in her office that day at all.

You can bet Lulu will apologize to Franco when this is all over, but Ryan is really the one to blame. It’s great that Lulu is stubborn enough to keep at it until she finds the real scoop! General Hospital spoilers say some hot memory drama’s ahead, so we’ll give you updates as other GH details emerge. Stick with the ABC soap and don’t forget to check CDL often for the latest General Hospital spoilers, updates and news.