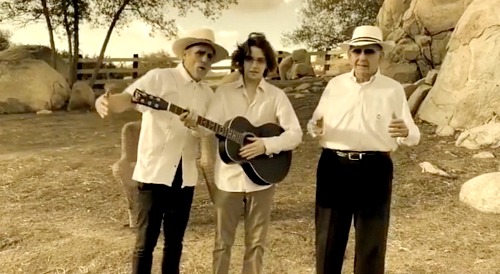 General Hospital (GH) spoilers has some fun news to pass on about a popular GH star. Maurice Benard, who portrays Sonny Corinthos on the ABC soap, recently shared a funny video of himself on social media crooning alongside his family to the tune “Guantanamera.”

The short video, which Maurice posted on Instagram, shows Maurice, his son, and his father singing the classic tune. The three belt out the lyrics, and the camera turns to reveal their audience…a group of llamas who look on uncomfortably as they listen to the goings on.

Maurice’s caption for the video is simply “The Quinceanera,” indicating that some young lady in Maurice’s family was celebrating her 15th birthday at the time the video was taped. That makes sense, since Maurice, his son, and his father are all dressed for the occasion.

The humorous video has received a lot of attention and views on Maurice’s Instagram feed becuse it’s all about intergenerational love and respect. Maurice’s followers have been responding in droves, commenting about how funny and touching the video is, with three generations singing their hearts out together. One fan commented: “What a blessing to be able to do this with your family.”

Brooklyn Rae Silzer, who portrays Emma Scorpio Drake on GH, commented on the video with: “Oh my goodness we can watch this everyday!!” And Eden McCoy, who portrays Josslyn Jacks, responded to the video as well. She said, “How great is this? The greatest.” Maurice later replied to Eden in the comments with: “Nothing like family.”

Be sure to check out the video below – you won’t be disappointed! Stay tuned to the ABC soap and don’t forget to check CDL often for the latest General Hospital spoilers, updates, and news