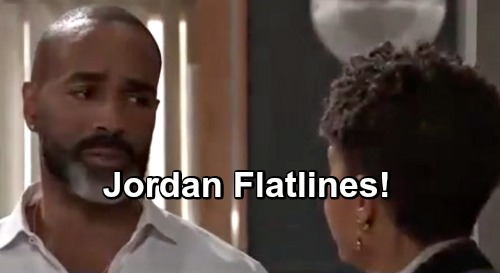 General Hospital (GH) spoilers tease that Drew Cain (Billy Miller) will battle confusion. At GH, Dr. Hamilton Finn (Michael Easton) will help Drew after he regains consciousness. Finn will explain the rare virus that Drew contracted is why he went blind. Drew will also hear about the accident in the parking garage, so he’ll wonder if he was able to stop the car.

Dr. Kim Nero (Tamara Braun) will be forced to admit that Drew indeed plowed into someone. She’ll reveal that Jordan Ashford) was hit, so Drew’s heart will sink. It won’t be long until Drew seeks out Curtis Ashford (Donnell Turner) and offers a sincere apology. He’ll hate that he’s the reason for Jordan’s life-threatening predicament.

Curtis will assure Drew that he doesn’t blame him for running over Jordan. It’s not like Drew intentionally rammed into her. He simply passed out and couldn’t help what the car did without him. General Hospital spoilers say Curtis show his pal some love and Drew will give the same in return. Now’s not the time to hold grudges or turn against anyone. Jordan certainly wouldn’t want that.

Curtis will have some incredibly emotional scenes at Jordan’s bedside. He’ll beg his wife to come back to him and build the future they talked about. Curtis has known Jordan a long time, but he’ll feel like their life together is just getting started. He won’t want to miss out on all the wonderful moments he has left to share with Jordan.

Unfortunately, things will get worse before they get better. General Hospital spoilers say Jordan’s condition will suddenly deteriorate. It sounds like Jordan will flatline and leave her doctors fearful.

Curtis will be forced to play the waiting game with some loved ones. Molly Lansing-Davis (Haley Pullos), T.J. Ashford (Tajh Bellow) and Stella Henry (Vernee Watson) will all provide their support.

Jordan will be rushed into emergency surgery. There’ll be some serious damage to her body, so the medical team at GH will do everything they can. General Hospital spoilers say the situation will start to look hopeless, but Curtis will try to keep faith alive. He’ll pray for a miracle as he awaits word on the outcome of Jordan’s crucial operation.

Some can’t-miss episodes are coming up this week. We’ll give you updates as other GH news emerges. Stick with the ABC soap and don’t forget to check CDL often for the latest General Hospital spoilers, updates and news.