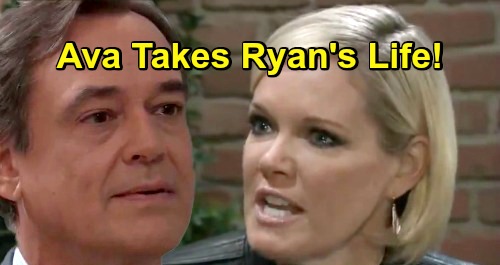 General Hospital (GH) spoilers reveal that Ryan Chamberlain (Jon Lindstrom) may have just sealed his fate. During a chat with Ava Jerome (Maura West), Ryan got all gushy for Valentine’s Day. He assured Ava of how incredible she is before promising to get her whatever she wanted.

Ava pointed out that she couldn’t have what she really desired, which is a chance to make things right with Kiki Jerome (Hayley Erin). That prompted another vow from Ryan. He insisted that he would ease Ava’s grief. Ryan argued that he wasn’t afraid to make that promise before adding, “It’s a promise I’d die to keep.” It sounds like Ryan just predicted his own death!

As GH heads into the final phase of this shocking storyline, it makes sense that they’d start dropping some lethal hints. There are only three possible outcomes for Ryan, and two of them wouldn’t be very satisfying. It’s possible Ryan could make a getaway and just be out there somewhere, but that would prompt outrage from fans. Ryan clearly needs to pay for his actions.

Besides, General Hospital isn’t going to need Ryan for another murder spree anytime soon. They might as well offer more closure than that. It’s possible Ryan will be arrested and locked up after a trial, but that doesn’t seem appropriate either. Anything besides death is too good for evil Ryan. He’s a fun character, but he’s done some horrible things that deserve a brutal exit.

That certainly lines up with Ryan’s ominous promise. Ryan may indeed die to ease Ava’s grief. Ryan’s comment even hints that Ava doing the deed herself. After all, what would ease Ava’s grief more than to kill the man who murdered her daughter? Ava’s the kind of gal who would get real pleasure out of that.

Ryan also had a twisted fantasy about tying Carly Corinthos (Laura Wright) and Sonny Corinthos (Maurice Benard) up. He presented Ava with knives in this fantasy and encouraged her to do whatever she wanted. Ryan enjoyed the thought of Ava being as lethal and ruthless as he is. He just may get his wish, but he’ll likely lose his life as well!