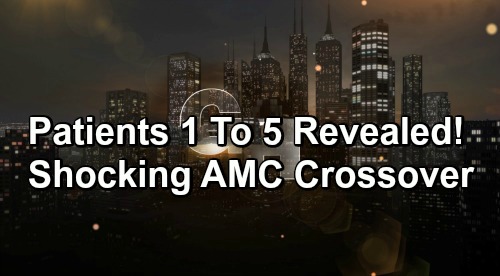 General Hospital spoilers tease that the patients in the Boronsky Clinic in Russia, which included Jason Morgan (Steve Burton) during the five years he was missing and presumed dead, could be the rest of the twins in Dr. Arthur Cabot’s twins study. Could this possibly be?

Back last August 2019, when Peter August was rescued from captivity by Liesl Obrecht (Kathleen Gati), Robert Scorpio (Tristan Rogers) showed up to arrest him. Peter made a deal with him for intel on Patients 1-5 of Dr. Richard Klein’s (Gene Farber) who had also been victims of Russian experiments, Jason having been Patient 6.

Peter didn’t know if they were still there, he himself had put Jason there so his father Cesar Faison (Anders Hove) wouldn’t kill him. This was also the same clinic he knew of from Valentin Cassadine, (James Patrick Stuart) who had his scoliosis surgeries there. This was also the same clinic where experimental procedures to heal and restore severely burned people were performed, and didn’t even leave a scar, and Valentin had helped Ava Jerome (Maura West) go to, which led to her finding Jason and helping him escape.

Ava didn’t finish the burn procedures however GH surgeons were able to complete her facial restoration based on some of Dr. Klein’s notes. General Hospital viewers will also recall that Peter was the one who stole the memory mapping flash drive with Drew Cain’s (Billy Miller) memories, hidden in the disco ball Christmas ornament Dr. Andre Maddox, (Anthony Montgomery), who we now know completed and perfected Dr. Cabot’s original procedures, had given Anna Devane (Finola Hughes); Anna, of course not knowing at the time that the flash drive was hidden inside.

Why would Peter need the flash drive? At that time, he was still behaving much like his mentor Valentin, holding things for leverage in case he needed them, although he is a changed man now who would not let the ends justify the means as Valentin still does. But Peter definitely must have been aware of the twins memory transfer experiments, and that Jason and Drew were the latest subjects of it.

Whether Peter knew any more about it is unclear except that he’d heard Dr. Klein bragging about his previous patients 1-5. Patient 5 obviously must have been Drew Cain since Patient 6 was Jason Morgan. The flash drive was later found in the lost and found of the Metro Court by DA Margaux Dawson (Elizabeth Hendrickson) after it somehow got lost in the process of Peter being dragged out by Liesl Obrecht, when she kidnapped him.

Peter knew there were previous subjects, although he may not have known who they were or exactly what was done to them; it’s possible that Dr. Klein and Dr. Cabot worked together, although Dr. Klein didn’t appear to have suffered from the blindness virus like Dr. Cabot did.

General Hospital spoilers tease that when you really think about it, and especially putting the All My Children history of Anna and Alex Devane Marick (Finola Hughes) in the mix, Alex was once brainwashed to become a spy, and to believe she was Anna.

Alex was supposed to kill Anna, had been believed dead for many years but Alex and her husband at the time, Dimitri Marick (Michael Nader),  rescued Anna who had been taken care of by an old man named Bart (Ralph Waite).

Significantly, compared to the twins memory transfer story, Anna also happened to have amnesia and had lost memory of much of her life and who she was! Alex also had flashbacks of Anna’s memories starting in 1999 when Finola Hughes migrated from General Hospital to All My Children.

The brainwashing clinic of the All My Children narrative could very well be the Boronsky Clinic, just a different wing than the burn treatments took place in, and Doctors Klein and Cabot could have started the experiments by brainwashing the twins – making them patients 1 and 2. GH buzz is that’s why none of the numbered patients remembered Dr. Cabot or participating in any studies with him, although Kevin Collins (Jon Lindstrom) did remember turning him down for the study!

Since Anna was missing and presumed dead in the mid-1990s during the time that Ryan Chamberlain committed his previous atrocities, and Ryan was supposedly blown up in a gas explosion of a funhouse, Ryan’s being in the Boronsky Clinic makes all kinds of sense –  they could have started in the burn wing and restored him physically to perfection, and then put him and Kevin into the twins study as patients 4 and 5.

General Hospital spoilers say Anna and Alex were probably in the study at the same time as Kevin and Ryan, since all suffered their blindness attacks (Alex, presumably since Anna has not been in touch with her) close to the same time.

Drew and Jason got theirs later because they were in Andre Maddox’s more perfected program…except, obviously the side effect of the blindness virus! More exciting drama and mysteries lie ahead on General Hospital; keep watching the show and check General Hospital spoilers frequently to see all the developments and twists and turns as they happen!