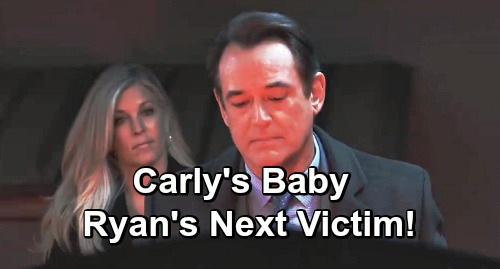 General Hospital (GH) spoilers tease that Carly Corinthos (Laura Wright) may soon be in some serious danger. She’s just found out that she’s pregnant and needs to keep her stress levels down, so now’s not a good time for her to be facing dangerous situations. But according to the new GH promo, it looks like she may be in danger from none other than Ryan Chamberlain (Jon Lindstrom).

Carly has been a thorn in Ryan’s side for a while now, with her incessant questions about the mystery patient at Ferncliff. She’s had a lot on her plate lately with her new pregnancy and the drama surrounding Josslyn Jacks (Eden McCoy) and Oscar Nero (Garren Stitt), so she hasn’t been bugging Ryan much about that lately.

But it seems that Carly may learn some new information about Ryan that could put her directly in harm’s way. In the promo, Carly is shown standing behind Ryan as he slams shuts the trunk of a car. It certainly looks like Ryan doesn’t know that Carly’s behind him, taking in everything he’s doing.

Of course, if this were anyone other than Ryan, this scene probably wouldn’t raise alarm bells. But since Ryan is capable of anything, he could have just about anything – or anyone – in the trunk of that car. Could he have something in there that Carly’s not supposed to see? That could certainly cause Ryan to want to harm Carly.

If Carly were to catch Ryan with something suspicious in that trunk, like a body or implements that could be used or were used in a murder, then he’d probably have to act fast to neutralize her. Carly might even end up stuffed in that trunk herself!

Of course, that could put both Carly and her baby at risk, and Carly could even end up losing the baby if she had to spend a considerable amount of time confined, scared, and stressed out. It’s a terrible thought, but Ryan’s next victim could be Carly’s unborn child.

We’ll have to wait to see what happens this week, but it certainly looks like Carly’s going to catch Ryan doing something suspicious. Do you think he’ll harm her to keep her from talking? Stay tuned to the ABC soap and don’t forget to check CDL often for the latest General Hospital spoilers, updates, and news.