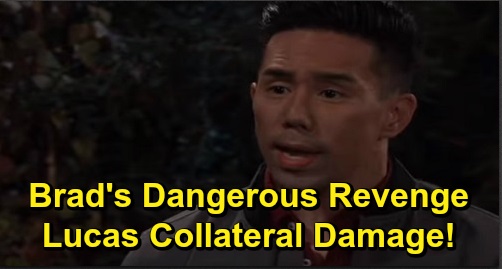 General Hospital (GH) spoilers tease that Brad Cooper (Parry Shen) will reel over Lucas Carnes’ (Ryan Carnes) fury. Brad’s in a tight spot since he’s been exhibiting suspicious behavior for months. Lucas feels like it all makes sense now. Thanks to Julian Jerome’s (William deVry) setup, Lucas is convinced that Brad’s been having an affair.

GH fans can expect Brad to keep defending himself, but Lucas just won’t buy it. Brad received flowers at the hospital and changed the passcode for his phone. He also shouted out to stop Michael from leaving in his dream, so that could be any old Michael as far as Lucas is concerned. It’s a common name after all.

Of course, what Lucas is most concerned about now is the nude photo that was sent to Brad’s phone. Brad will find himself in a deeper hole after he tries to prove he doesn’t know this person. Julian will text back a flirty reply that makes Lucas even more convinced he’s right.

Liesl Obrecht’s (Kathleen Gati) will send a text of her own, which Brad will obviously have to hide from Lucas. He can’t expose his involvement in the test results tampering he did for Liesl. After Lucas explodes again and decides to stay at the Corinthos house with “Wiley Cooper-Jones” (Erik and Theo Olson), Brad will seek Julian’s assistance and face an infuriating shocker instead.

Once Brad knows what Julian did, his anger will explode as well. Brad won’t understand how Julian thinks he can get away with this. He’s not going to stand by and lose his Lucas over some bogus cheating scandal. Julian will threaten Brad and demand that he divorce Lucas. He’ll push Brad to leave town, which would mean leaving Lucas and “Wiley” behind for good.

Julian’s nuts if he expects Brad to just go along with that. General Hospital spoilers say Brad will refuse to give Julian what he wants. Instead, he’ll decide it’s Julian who needs to be out of Lucas’ life. He’ll return to Lucas and expose Julian’s sabotage efforts. The trouble is Lucas won’t really understand why Julian would do it.

Brad can’t share that part of the story since it’d mean losing “Wiley,” but he’ll at least convince Lucas that Julian’s responsible. General Hospital spoilers say Lucas will feel like his world’s crumbling at this point. He won’t trust Brad or Julian at all, so this will be a real nightmare.

Brad’s relationship with Lucas will be hanging by a thread – and thread that will surely snap after the truth about “Wiley” comes out. It sounds like Brad’s revenge and desperate attempt to clear his name could backfire! We’ll give you updates as other GH news emerges. Stay tuned to the ABC soap and don’t forget to check CDL often for the latest General Hospital spoilers, updates and news.