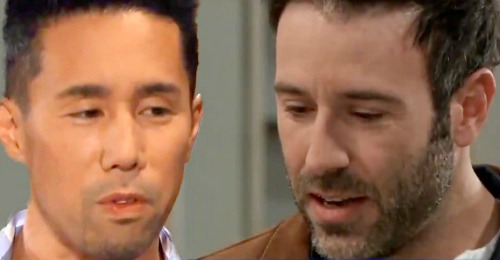 General Hospital (GH) spoilers tease that Brad Cooper (Parry Shen) may be Sam McCall’s (Kelly Monaco) brother-in-law, but lying for Shiloh Archer (Coby Ryan McLaughlin) will get him in big trouble. He doesn’t realize it yet, but he’s putting Kristina Corinthos-Davis (Lexi Ainsworth) in even more danger. What will happen when Sam and Jason Morgan (Steve Burton) figure out what Brad’s done?

Brad believes Sam no longer wants to be with Jason and has joined the Dawn of Day family. He doesn’t know Sam’s working undercover to try and protect Kristina from Shiloh. Brad’s also falling hook, line, and sinker for Shiloh’s lies. Unfortunately, Brad’s own deception will keep Sam and Jason from their latest evidence breakthrough.

Thanks to that DoD cup, Jason and Sam were on the verge of taking Shiloh down. If Brad had performed the tests he was asked to do, they would have proof that Shiloh’s drugging and raping every woman that joins his trust. Brad has technically just made himself complicit in Shiloh’s crimes.

General Hospital spoilers say Shiloh will confront Jason and accuse him of kidnapping Kristina. It won’t take Jason long to figure out that Shiloh intervened in the cup situation. That’s especially true since Jason will realize Brad is into DoD. He’ll put the clues together and determine that maybe this cup was never properly tested.

That might give Jason a chance to have the cup tested elsewhere. Will Harrison Chase (Josh Swickard) help Jason out with this? After Michael Corinthos’ (Chad Duell) latest talk with Willow Tait (Katelyn MacMullen), could Jason involve Chase and get some real results? Jason really doesn’t need to let this shot pass him by. This could be his ticket to helping Kristina and so many other vulnerable women.

Both Sam and Jason will be furious with Brad when the truth comes out. Lucas Jones (Ryan Carnes) won’t be pleased either since Brad is tampering with GH lab results again. Will this mistake lead to Brad’s downfall? Brad has made a colossal blunder, which he could pay for big time. He’s getting tangled up in Shiloh’s web, which can’t be good since Willow believes Shiloh is the father of her baby.

Of course, Willow doesn’t know her child with Shiloh died. Shiloh doesn’t know the kid ever existed at all, but what happens when that changes? General Hospital spoilers say Brad had better hold “Wiley Cooper-Jones) a little tighter and hope for the best! We’ll give you updates as other GH news comes in. Stick with the ABC soap and don’t forget to check CDL often for the latest General Hospital spoilers, updates and news.