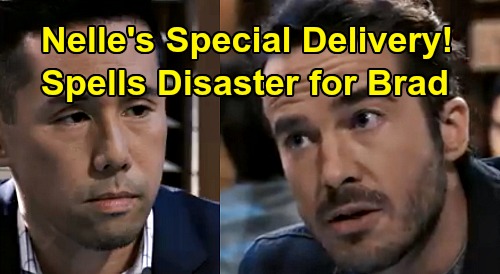 General Hospital (GH) spoilers tease that Lucas Jones (Ryan Carnes) will grow increasingly concerned about Brad Cooper (Parry Shen). It’s clear that Brad’s really at the end of his rope. He had a major meltdown during his therapy session with Dr. Neil Byrne (Joe Flanigan). Brad was desperate to score some medication and get a grip on all this anxiety he’s dealing with.

However, Neil can tell Brad’s got some serious issues – more than could be addressed in one session alone. He insisted he wanted to see Brad again and requested that Lucas come along. Brad pointed out that Lucas is a busy guy, but he promised to bring it up. Of course, Brad may have no real intention of doing that. The last thing he needs is Lucas asking questions and pushing him to open up.

Even so, Lucas will likely find out about this therapy session. There are several ways for that to happen, starting with running into Neil. If Brad claims Lucas couldn’t come, Neil will assume Lucas is in the loop. He could easily bump into Lucas somewhere and suggest he hopes they can all be there next time.

Then again, Lucas could spot Brad’s new meds or notice he’s acting even weirder than usual. Neil noted that everyone responds differently to this medication, so they’d have to adjust it to suit Brad. It’s easy to imagine some side effects that tip Lucas off and force Brad to come clean.

Regardless, Lucas will get a step closer to the truth soon. General Hospital spoilers say Lucas will launch a bit of an investigation. He may do some spying and snooping to get to the bottom of this. Lucas will be determined to find out what’s bothering Brad. He’ll realize Brad’s been on edge for far too long, and he’ll suspect there’s more to the story here.

Nelle Benson (Chloe Lanier) could make matters worse after Brad helps out with her push for parole. General Hospital spoilers say Brad will get a special delivery on October 21. Someone will send him flowers, so perhaps Nelle will offer Brad an arrangement out of gratitude. Naturally, this could intensify Lucas’ suspicions – especially if Nelle writes something ominous on the card. GH fans know Nelle loves cryptic messages!

It sounds like some exciting scenes are brewing as we build toward the baby swap revelation. We’ll give you updates as other GH news comes in. Stay tuned to the ABC soap and don’t forget to check CDL often for the latest General Hospital spoilers, updates and news.