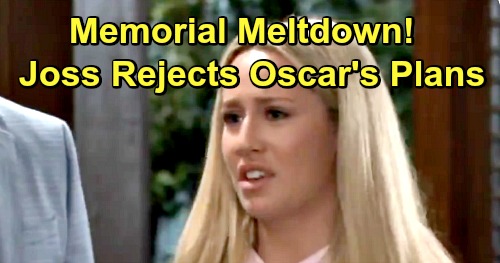 General Hospital (GH) spoilers tease that Oscar Nero’s (Garren Stitt) memorial service will begin on May 13, but Josslyn Jacks (Eden McCoy) won’t want to participate – at least not at first. The wound is still fresh, and Joss just isn’t ready to let go of Oscar. Accepting that it’s time for a memorial means accepting that Oscar’s gone for good. Josslyn’s head knows that, but her heart just isn’t ready for it.

In an interview with Soap Opera Digest, one of GH’s co-head writers talked about where Josslyn’s mind goes during this difficult time. Shelly Altman offered a glimpse of how Joss will react and eventually push through her pain. “She’s a little bit in denial and she resists following Oscar’s instructions from the grave,” Altman said.

However, Josslyn will find her courage and strength sooner or later. She’ll do her best to tackle this grief hurdle and move into the next chapter of her life. Josslyn won’t find it easy to celebrate the way Oscar wants, but she’ll honor her his final wishes. It’ll be an important step toward Josslyn’s own healing as well. Altman insisted that “…ultimately, she needs to be as strong as she’s ever been in her life.”

General Hospital spoilers say Cameron Webber (William Lipton) will also be a crucial part of the memorial festivities for lack of a better word. He’ll probably think it feels weird to live it up when they’re burying his buddy, but he’ll do whatever Oscar requested. It looks like Franco Baldwin (Roger Howarth) may give some good advice as he attempts to bond with his stepson.

Drew Cain (Billy Miller) and Dr. Kim Nero (Tamara Braun) will find this memorial the toughest to take in. As grieving parents, it’ll be downright excruciating. “It doesn’t matter how much time you have to prepare or how certain the fate is; the loss is profound,” Altman said. “They are respecting Oscar’s wishes about how he wants to be put to rest and remembered, but it is a very difficult day for them.”

Once Oscar is honored and buried, his loved ones will have to face the finality of all this and let go. General Hospital spoilers say the struggles of grief will be particularly hard for Kim, who could find herself spiraling soon enough. We’ll give you updates as other GH news comes in. Stay tuned to the ABC soap and don’t forget to check CDL often for the latest General Hospital spoilers, updates and news.