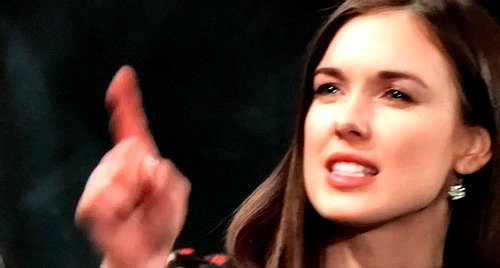 General Hospital (GH) spoilers tease that Nina Reeves (Michelle Stafford) will push Willow Tait (Katelyn MacMullen) to her limit. These two really got off on the wrong foot and things have only gone downhill from there. They can’t even be around each other without lashing out in some way.

Nina criticized Willow as a teacher and suggested she couldn’t understand because she didn’t have children of her own. That naturally infuriated Willow, who made the painful decision to give up her baby for adoption. Willow did it out of love and protection, so Nina’s words cut deep.

Of course, Willow returned the favor later. She argued that Nina’s poor stepmom skills are the reason Charlotte Cassadine (Scarlett Fernandez) is so problematic. Nina nearly got Willow fired over that, so the feud’s in full swing now.

Notice that a great deal of the conflict between these two has revolved around mothering and children. There’s a good reason for that since Nina is almost certainly Willow’s biological mother. Unfortunately, Nina may live to regret the harsh accusations and insults. Once Sasha Gilmore (Sofia Mattsson) is exposed as a fraud, it’s just a matter of time until Nina realizes Willow is the real deal.

Knowing Nina like we do, her hatred for Willow will probably melt away. Nina has wanted a child for practically as long as she can remember. This has been her one wish, so she’s going to be devastated when the Sasha deception’s exposed. Finding out Willow is her actual daughter will give Nina a shocking second chance.

Once she ultimately hears everything Willow’s been through, that should soften Nina, too. Nina can be a real piece of work, but she’s got a good heart deep down. She’ll undoubtedly want to love and know Willow, but will their previous drama get in the way? Willow’s sure to be overwhelmed by the lies she’s apparently been told. She’ll probably also hate that Nina of all people is her biological mother.

General Hospital spoilers point to a big blowup before Nina learns the truth about Willow. She’ll alienate her like never before, so that could affect how Willow reacts to their eventual mother-daughter bond. Nina will already be in a fragile place because of Sasha’s scheme with Valentin Cassadine (James Patrick Stuart). Will Willow break Nina’s heart all over again by completely rejecting her?

That seems like a good option initially. GH isn’t going to make the bonding process easy for these two, and Willow will probably be the main one to drag her feet. She’s had a rough life that’s been full of disappointments, so she won’t want to face more of it with Nina. Willow’s anger could prevent their immediate connection, but you can bet they’ll find their way to peace in time.

For now, General Hospital spoilers say Nina will keep doing everything she can to push Sasha toward Michael Corinthos (Chad Duell) and keep Willow away from him. That’ll lead to more Nina and Willow friction as well, so stay tuned. We’ll give you updates as other GH news comes in. Stick with the ABC soap and don’t forget to check CDL often for the latest General Hospital spoilers, updates and news.