General Hospital Spoilers: Kristina Gets Her Fire Back, Fresh Start Brings New Love – See What Romantic Future Will Look Like 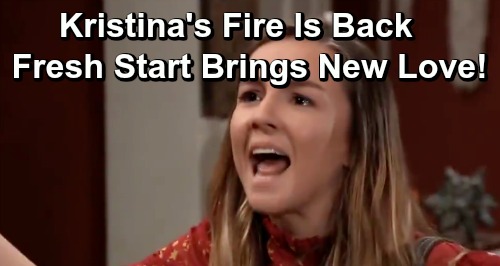 General Hospital (GH) spoilers tease that Kristina Corinthos-Davis (Lexi Ainsworth) will have to find a new path. She was feeling lost when Dawn of Day came along and sucked her in with their too-good-to-be-true lifestyle. Shiloh Archer (Coby Ryan McLaughlin) likes to preach about serving others, but he’s really only serving himself. That’s why Shiloh’s keeping Kristina’s pledge for whenever he decides to use it.

Of course, there isn’t much Kristina can do about that. She’s thankfully got Jason Morgan (Steve Burton) and Sonny Corinthos (Maurice Benard) to clean up the mess. Shiloh could still take the trust offering public, but the beauty of soaps is knowing that it’ll all work out somehow. Alexis Davis (Nancy Lee Grahn) is staying put on General Hospital, so Shiloh can’t really do any lasting damage.

In other words, Kristina will be able to put all this behind her eventually. When she does, what will her future look like? As we pointed out, Kristina was lost before DoD. There’s a good chance she’s feeling lost again, although she’s putting on a brave face for her family. Kristina seems ashamed of what she let herself get drawn into, but it was nice to see some of her old fire on display in Friday’s episode.

When Kristina ranted about the “sister wife” dress she was forced to wear, we knew the old Kristina was back! As time goes on, Kristina will slowly heal and perhaps open her heart to more normal ways of moving forward. The end of her relationship with Parker Forsyth (Ashley Jones) was tough, but Kristina may find love again. Since Kristina is bisexual, she could end up with a new man or a woman.

Unfortunately, we’d say a Kristina and Valerie Spencer (Paulina Bugembe) pairing doesn’t seem too likely now. Brytni Sarpy’s Valerie had some nice chemistry with Kristina, but it’s just not there with the new Val. Don’t get us wrong; Bugembe’s Valerie is great as a no-nonsense detective. However, GH should’ve taken a different recast route if they wanted Valerie and Kristina to have a shot at working.

Maybe Harrison Chase (Josh Swickard) could be an option instead. After Chase and Kristina shared scenes recently, some General Hospital fans were quick to suggest this possibility. If Chase and Willow Tait’s (Katelyn MacMullen) relationship falls apart as expected, Kristina and Chase might be something GH will consider.

Whatever the case, General Hospital spoilers say Kristina will have to press on and put DoD in the rearview mirror. She may do that through love and perhaps finding a new passion. Kristina needs a sense of purpose – her own purpose, not one that someone like Shiloh forces on her. Let’s hope Kristina can figure things out and settle on where she wants her life to go.

Are you glad Kristina’s free from DoD and ready for a new beginning? We’ll give you updates as other GH news comes in. Stay tuned to the ABC soap and don’t forget to check CDL often for the latest General Hospital spoilers, updates and news.