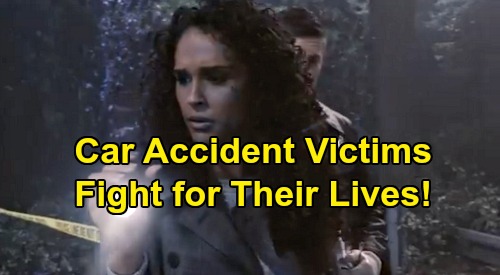 General Hospital (GH) spoilers tease that Julian Jerome (William deVry) will regret taking drastic action against Brad Cooper (Parry Shen). Since he thought Lucas Jones (Ryan Carnes) would be busy at work all evening, Julian took his chance to tamper with Brad’s car. He suggested Brad had left him no choice and seemingly cut the brakes, so this is a recipe for disaster!

Lucas managed to get out of his shift at GH, which brought him home for another argument with Brad Cooper (Parry Shen). General Hospital spoilers say that faceoff will ultimately continue in the car. It looks like Lucas will drive Brad’s vehicle, and they’ll keep the bickering going on the way to pick up “Wiley Cooper-Jones” (Erik and Theo Olson).

Now we’ve also got Kendra Lennon (Michelle Argyris), who scored the upper hand on Alexis Davis (Nancy Lee Grahn). Kendra bashed Alexis in the head with a rock, so Alexis will wake up terrified on Monday, December 2. It won’t be long until Kendra’s raging about how Kiefer Bauer (Christian Alexander) didn’t deserve to die. Will Kendra dump Alexis so she can get smashed like roadkill, too?

That seems like a good option, especially since Lucas should be behind the wheel of a runaway car. Julian may have set off a terrible chain reaction by trying to kill Brad. General Hospital spoilers say Julian will face utter horror in the week ahead. He may learn that Lucas mowed down Alexis, which could lead to injuries for both of them.

Of course, it’s also possible Lucas will plow into a car containing both Kendra and Alexis. A crash might go down before Kendra has a chance to carry out the rest of her plan. Regardless, it seems Brad, Lucas and Alexis will all wind up in a life-threatening situation thanks to Julian.

Since Julian was willing to resort to this murder plot, he clearly doesn’t care much about Brad’s outcome. However, Julian will panic if he’s the reason for Lucas and Alexis’ ordeal. We’re talking about Julian’s son and the woman who’s arguably the love of his life.

Julian has never really gotten over Alexis and probably never will. He certainly couldn’t get over it if he led to her death. The same goes for Lucas, so Julian will hold out hope that they can both pull through this nightmare.

General Hospital spoilers say Julian will deal with deep remorse during the week of December 9-13. He’ll undoubtedly see all the suffering he’s caused at GH and wish he could undo his mistake. Will guilt eat away at Julian until he makes a confession? Could that lead to a confession about “Wiley Cooper-Jones” as well?

This baby swap bombshell could be rapidly approaching depending on how Julian chooses to handle this. We’ll give you updates as other GH news comes in. Stay tuned to the ABC soap and don’t forget to check CDL often for the latest General Hospital spoilers, updates and news.