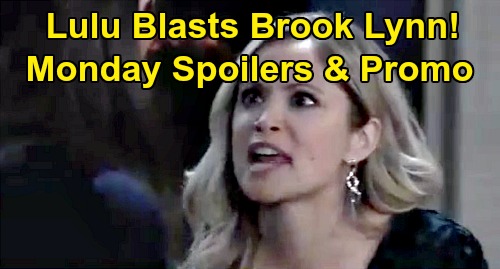 General Hospital (GH) spoilers for Monday, December 2, tease that some exciting scenes are coming up. We should note that GH will be preempted on Friday, November 29. The action will resume on Monday, so fans won’t miss anything. Based on Monday’s preview and some accompanying spoilers, you can bet this episode will be worth the wait!

For starters, Lulu Spencer (Emme Rylan) will fly into a rage after Brook Lynn Ashton (Amanda Setton) gets on her bad side. Brook Lynn may take a dig a Lulu for divorcing Dante Falconeri (Dominic Zamprogna) and moving on. However, Brook Lynn hasn’t been around to witness Lulu’s heartache and really needs to mind her own business. Lulu will make that crystal clear during her explosive outburst on Monday. She’ll insist that Dante abandoned her and will urge Brook Lynn to back off.

There’ll be another round of drama later – perhaps due to “Drew Cain” aka Franco Baldwin’s (Roger Howarth) presence at the gathering. An angry Monica Quartermaine (Leslie Charleson) will ask if Olivia Quartermaine (Lisa LoCicero) has really lost it. Of course, some might argue Monica’s the one who’s lost it since she’s acting like Franco’s actually “Drew.” The real Drew was presumed dead in a plane crash and can’t be replaced by someone who happens to have “Drew’s” old memories temporarily.

Other General Hospital spoilers say Maxie Jones (Kirsten Storms) will bring up a tricky subject. She’ll talk to Peter August (Wes Ramsey) about his earlier conversation with Andre Maddox (Anthony Montgomery) and how it made him uncomfortable. Maxie will assume she knows why, but she obviously doesn’t! Whatever theory Maxie came up with will be way off, but Peter may go along with it anyway. He certainly can’t tell Maxie the truth about his sinister past and everything he’s done to hide it.

Next, Lucas Jones (Ryan Jones) will grow increasingly frustrated with Brad Cooper (Parry Shen). He’s assured Brad that they can get past his secret, but that’s only because he doesn’t know just how bad it is. Brad understands telling the truth could destroy his family, so he’ll remain reluctant to confess.

Lucas will yell that Brad should just tell him what it is. He’ll be outraged over Brad’s refusal to come clean, but Brad will continue to drag his feet. It looks like they’ll end up in Brad’s car together later, which is terrible news since Julian Jerome (William deVry) tampered with it!

Of course, thanks to Kristina Corinthos-Davis (Lexi Ainsworth) bogus confession and the info Shiloh Archer (Coby Ryan McLaughlin) passed along, Kendra’s never going to believe Alexis’ side of the story. She’ll remain convinced it was straight-up murder – and she’ll want Alexis to pay the price for it.

Will Alexis get hit by Brad’s sabotaged car, which Lucas will seemingly be driving? General Hospital spoilers suggest these storylines are set to collide, but Julian and Neil Byrne (Joe Flanigan) will have to do more detective work first. Julian just remembered Kendra being near the dumpster where the rats were poisoned and how she dumped a canister identical to the one Neil had. It’ll become evident to Neil and Julian that Kendra targeted Alexis, but they’ll struggle to figure out why.

Over with Sonny Corinthos (Maurice Benard), he’ll tell Carly Corinthos (Laura Wright) he’s not going to be “that guy.” Perhaps Sonny will mean the kind of guy who lives in denial about how serious his father’s condition is. Sonny thought Mike Corbin (Max Gail) would be all right, but his visit in the Corinthos home did NOT go well. He eventually decided it was time for Mike to head back to Turning Woods.

Carly may encourage Sonny to open up about how he’s feeling on Monday. Sonny may realize he has to accept Mike’s mental state as well as the fact that it’s only going to get worse. He can get through this with Carly and the rest of his family supporting him.

It sounds like Monday will deliver a can’t-miss episode! We’ll give you updates as other GH details emerge. Stay tuned to the ABC soap and don’t forget to check CDL often for the latest General Hospital spoilers, updates and news.