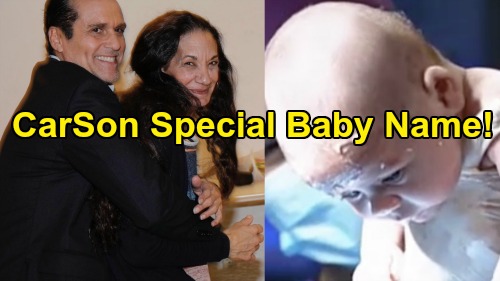 General Hospital (GH) spoilers tease that Carly Corinthos (Laura Wright) and Sonny Corinthos (Maurice Benard)’s new daughter will be in good health going forward, despite her diagnosis of Spina Bifida. On the episode airing on Monday, September 30, Sonny and Carly welcomed little Donna Corinthos (Ella and Emma Hulen) into the world, and they were thrilled to discover that her condition was relatively mild.

Donna still had to undergo surgery right after birth, just as planned, but Sonny and Carly were thrilled to be able to hold and cuddle her in the moments before surgery. It was a wonderful moment for the couple, and they happily announced the baby’s name to GH viewers and to the world.

Later in the episode, Sonny and Carly shared the news about their little girl with their other children, who were thrilled to hear that they had a new little sister. As GH viewers know, Carly and Sonny kept the baby’s gender a secret, and so the baby’s name was a secret as well.

And then came the moment when Sonny shared exactly were the name Donna came from. He described a woman named Donna Messina from the old neighborhood and had some seriously touching things to say about her. Clearly, Sonny has deep feelings for his old friend Donna, as he got choked up while recounting some of her traits and key moments from his friendship with her.

As you may know, the name Donna Messina has special significance for the GH family. Donna Messina was the name of the head of GH’s hair and makeup department who died in December of 2018. Her death hit the GH family hard, and at the time Maurice Benard shared a photo of himself with Donna on Instagram along with a poignant caption in which he stated, “Sometimes you meet someone in life you just connect with and then unfortunately life just takes that person away.”

It’s truly special that GH chose to honor Donna Messina with a lasting tribute in this fashion. Surely for the GH cast and crew, little Donna Corinthos will be a constant reminder of their good friend and colleague who was gone too soon.

Sometimes you meet someone in life you just connect with and then unfortunately life just takes that person away. And no matter how much your heart breaks you want to remember the good times. My best friend my sister Donna used 2 hate taking pictures. I used to have to grab her and hold her. And we would and laugh and laugh. I will never forget this memory and I will never forget what you meant in my life 💑🍕