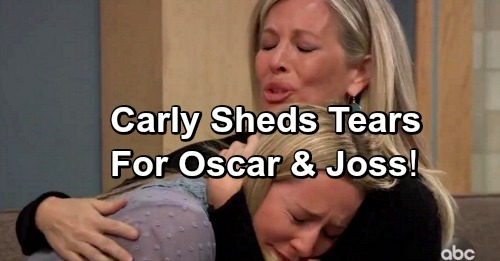 General Hospital spoilers tease that Carly Corinthos (Laura Wright) will be moved to tears over Oscar Nero’s (Garren Lake Stitt) impending death and her daughter Josslyn Jacks’ (Eden McCoy) broken heart. Oscar is on the last leg of his life, with Dr. Monica Quartermaine (Leslie Charleson) and Dr. Terry Randolph (Cassandra James) not being able to give his parents, Drew Cain (Billy Miller) and Dr. Kim Nero (Tamara Braun) any hope for his survival.

The decision was made to move Oscar and his mom into the Quartermaine mansion, where Drew already lives, as a form of hospice, which Olivia Quartermaine (Lisa LoCicero) will be getting ready for them this week, April 15-19, on General Hospital.

Many longtime General Hospital fans have likened the sad story of Oscar and Joss to that of Stone Cates (Michael Sutton) and Robin Scorpio-Drake (Kimberly McCullough), who were teenage lovers. Stone contracted HIV which turned into full-blown AIDS and died in Robin’s arms; meanwhile she caught HIV from him before he had been diagnosed. 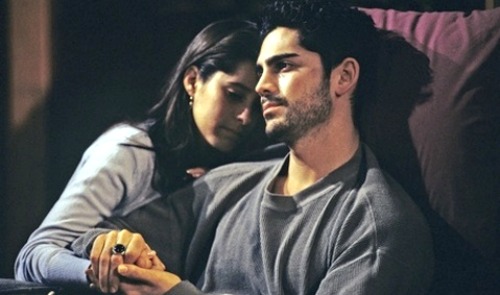 Oscar and Joss even made their vows signified with a lock attached to the footbridge they stood on, when Oscar had his big seizure, on the same footbridge that Robin and Stone once met on.

This will be when Carly will call Joss’s father, Jasper ‘Jax’ Jacks (Ingo Rademacher) to let him know of the terrible fate of his daughter’s first love. General Hospital spoilers say Jax will soon come rushing to comfort Joss along with the rest of her family when Oscar finally dies, which General Hospital spoilers tease will be soon, possibly even by the end of the month – May Sweeps start April 25…

It’s expected that Joss will go through extreme grieving, because it hasn’t been all that long since her older brother Morgan Corinthos (Bryan Craig) died, and that’s grief on top of grief.

Carly may be affected in this way as well, even though she is having a new baby and she’s not in love with Oscar like Joss is, she’ll feel her daughter’s pain and grief like it was her own.