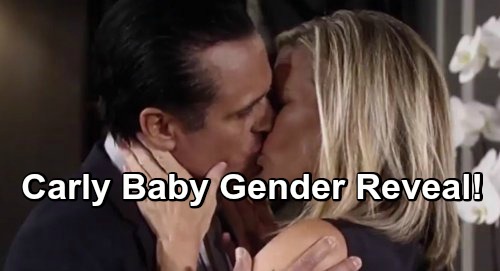 General Hospital (GH) spoilers tease that Carly Corinthos (Laura Wright) will be deeply moved. She’ll face a flood of tears on April 17 as some big news arrives. It seems these will be tears of joy, so Carly will most likely have an ultrasound appointment. Since Carly and Sonny Corinthos (Maurice Benard) should be able to learn the baby’s gender by then, perhaps they’ll choose to find out.

Will the Corinthos clan be adding a bouncing baby boy or a beautiful little girl? Carly will just wants a healthy and happy kid, so she’ll be thrilled no matter what. However, Sonny already has Avery Corinthos (Ava and Grace Scarola) in that little girl spot. GH might want to give him another son instead, especially since he lost Morgan Corinthos (Bryan Craig).

If Dr. Kim Nero (Tamara Braun) ends up filling in again and takes the lead on this ultrasound, that could stir up some emotions for her, too. Oscar Nero (Garren Stitt) will always be her baby boy, but she’s about to lose him forever. Kim could easily get emotional as she reflects on her pregnancy with Oscar. It’ll be hard for her to watch a couple so full of hope when she’s facing such a huge loss.

Hearing about a boy for Carly and Sonny would also affect Michael Corinthos (Chad Duell). He still doesn’t know “Wiley Cooper-Jones” is his son, so “CarSon’s” news could hit him hard. Michael would have to wonder why his getting-too-old-for-this mom is getting the gift of a child when he was robbed. He would undoubtedly be happy for his parents, but it could privately put him in a dark place again.

Bottom line, it makes the most sense for the new Corinthos kid to be male instead of female. There are a lot more story tie-ins that way, but General Hospital is known for curveballs! We can’t rule out a girl here, but we’re still betting on a boy for now.