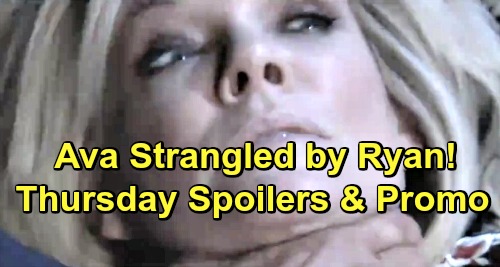 General Hospital (GH) spoilers for Thursday, April 4, tease that Lulu Falconeri (Emme Rylan) will be startled by what she believes is an intruder. As she panics, Lulu will grab a nearby vase and yell for his person to stay away from her. GH fans know Lulu was nearly killed by Ryan Chamberlain (Jon Lindstrom) and now Dante Falconeri (Dominic Zamprogna) is gone again, so no one can blame her for being on edge.

However, this is probably just a misunderstanding. General Hospital spoilers say Laura Webber (Genie Francis) will get a shock as well, so maybe she’ll simply catch Lulu off guard. Then again, it could be Dr. Kevin Collins (Jon Lindstrom) who sends Lulu’s mind back to a terrible place. After all, it looks just like his evil twin.

Whatever the case, Laura will be there for Lulu as she deals with Dante’s departure. She’ll even encourage Lulu to leave town for a while, so she may think Dante could use her support in Wales. Unfortunately, Dante insisted this was something he had to tackle on his own. It sounds like Lulu will respect Dante’s wishes and try to hold down the fort alone.

Meanwhile, Josslyn Jacks (Eden McCoy) will freak when Oscar Nero (Garren Stitt) collapses on the footbridge. They were having a nice moment, but it’ll turn to one of total terror in Thursday’s episode. Joss will get on the phone and summon paramedics immediately.

Across town, Dr. Kim Nero (Tamara Braun) will talk about something she can’t do anymore. This obviously involves Oscar, so Julian Jerome (William deVry) will urge Kim to lean on him. He knows all of this is rough on her, but he’ll want to be her lifeline.

At the boxing gym, Curtis Ashford (Donnell Turner) will bump into Drew Cain (Billy Miller). He’ll let Drew know that he’s got his back, so his buddy should appreciate that. Sadly, horrible news is headed Kim and Drew’s way. When they hear about Oscar’s latest seizure, they’ll rush to GH and prepare for the worst.

Other General Hospital spoilers say Laura will speak with Kevin about their divorce papers. She’ll admit she got them from Alexis Davis (Nancy Lee Grahn), but is this really the end? Laura and Kevin still love each other, so maybe they’ll hold off on that step for now. They really need to give this some time and hopefully give things another try when Laura’s ready.

Over with Carly Corinthos (Laura Wright), she’ll tell Epiphany Johnson (Sonya Eddy) that there are some things you never forget. Will she be referring to the horror she endured because of Ryan? Could it involve her feud with Ava Jerome (Maura West) instead? Either way, there’ll be a big Ava shocker on Thursday. A stunning nightmare is in her future!

General Hospital’s preview video shows a man’s hand choking the life out of Ava, so all the Ryan hints will really get to her. She’ll be haunted by her murderous ex-fiancé in her dreams. Of course, Ava won’t let herself cower into a corner. She’s the kind of gal who uses fear to fuel a fight. Ava will soon learn that Ryan’s been found, but what does that mean exactly?

It’s possible Ryan’s body – or what they believe is his body – surfaced. Ryan’s awfully sneaky, so who knows what kind of trick he could pull off. It’s also possible Jordan Ashford (Briana Nicole Henry) will know the general area where Ryan is. The cops could still be closing in. Regardless, it’s tough to believe Ryan is truly dead or will just go to prison. Ava deserves a final showdown with the man who tormented her.

In the meantime, Jordan will hear from Stella Henry (Vernee Watson). General Hospital spoilers say Stella will have some updates on Jordan’s dialysis – and they probably won’t be good. Jordan’s kidney transplant may become more crucial than ever soon enough.

GH viewers won’t want to miss the gripping drama ahead. We’ll keep you posted as other details emerge. Stick with the ABC soap and don’t forget to check CDL often for the latest General Hospital spoilers, updates and news.