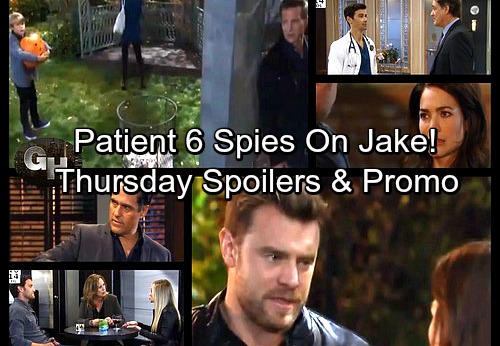 General Hospital (GH) spoilers for Thursday, October 19, tease that Franco (Roger Howarth) will reel over Betsy’s (Deborah Strang) latest revelation. She just admitted that Andrew faced horrible injuries after falling down the basement stairs. Since Franco was to blame, it wasn’t safe for Drew to remain in their home.

Franco will ask where Andrew went after Betsy gave him up. He’ll hope he can get a solid lead and track Drew down, but Betsy may not have any more answers. Franco should probably tackle this from other angles if he wants to reconnect with his childhood friend.

Elsewhere, Jason (Billy Miller) will push Liz (Rebecca Herbst) to tell him what’s going on. He’ll suggest that if there’s something he needs to know, she should spill it. Jason’s always wary when Franco’s involved, so he’s not going to let this go.

Other General Hospital spoilers say Ava (Maura West) will feel like her work is done. After handing over Patient Six’s (Steve Burton) message to Sonny (Maurice Benard), Ava will head for the door. Sonny will tell Ava to hold on. He’ll demand answers about where this message came from, but Ava won’t be able to help much.

Nevertheless, classic Jason will be hopeful. He believes Sonny will look into it whether he buys what’s on that paper or not. Since Ava’s stuck in the middle, Sonny will want to figure out if this is genuine info or a twisted game.

Meanwhile, Patient Six will creep around Port Charles. He’ll spot Jake (Hudson West) in the park, but he’ll manage to duck out of sight. General Hospital spoilers say Jake will sense that someone’s spying. As he clutches a pumpkin, Jake will call out to the person watching him. He’ll ask who’s there, but it looks like classic Jason will stay silent and motionless until the coast is clear.

Across town, Laura (Genie Francis) will complain about Kevin’s (Jon Lindstrom) spontaneous proposal and the suspense she’s facing now. She wants a more romantic marriage offer, but Lulu (Emme Rylan) will wonder if perfection is really necessary. She’ll think maybe Laura should just say yes and get on with her happily ever after.

At GH, Kevin will notice that Griffin (Matt Cohen) seems troubled. He’ll push the distressed doc to open up about the dilemma he’s facing. Griffin might confess that he left the priesthood and now his future feels uncertain. He wants to be with Ava, but he doesn’t know if he’s ready for a real relationship.

Can Griffin get his act together and meet Ava’s needs? We’ll give you updates as other GH news comes in. Stick with the ABC soap and don’t forget to check CDL often for the latest General Hospital spoilers, updates and news.