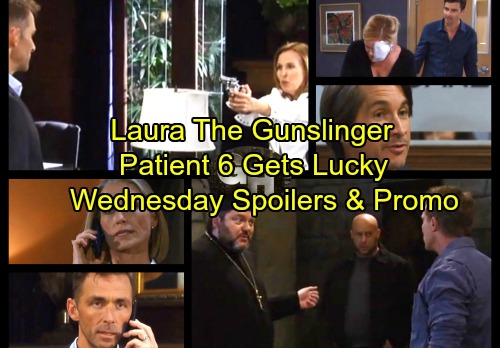 General Hospital (GH) spoilers for Wednesday, October 4, tease that Griffin (Matt Cohen) will push Ava (Maura West) to leave her belongings behind. He just saved her from evil Dr. Klein (Gene Farber), but someone else could come along any second. Griffin will insist that they need to get out of there ASAP.

Ava will continue to frantically pack, but she might be stalling a bit. After everything that happened between them, Ava may even suggest that she can take it from here. She was obviously hurt and embarrassed when Griffin rejected her back in Port Charles.

Of course, Ava could simply be so materialistic that she refuses to leave without her stuff. You never really know what’s going on inside Ava’s head. At the church, Patient Six (Steve Burton) will learn that a ship is headed to America. He’ll hope that the priest’s associate can get him on board.

This seems to be a lucky break for Patient Six, but more trouble is brewing. You can bet that Burton’s character will face another snag or two before he makes it home. In Monaco, Finn (Michael Easton) will ask if Anna (Finola Hughes) has a plan B. He’ll wonder what’s going to happen if Cassandra (Jessica Tuck) doesn’t bite.

Anna will probably argue that she doesn’t need a backup strategy. She’ll be convinced that Cassandra is going to take Finn up on his offer. Meanwhile, Valentin (James Patrick Stuart) will try to figure out what Cassandra wants. She just shocked him with a call and now it’s time to get down to business.

Cassandra will contend that they have important matters to discuss. She’ll think there are some things of mutual interest that need to be addressed. GH spoilers say Valentin will look intrigued by Cassandra’s suggestion. It appears she’ll demand a meeting in Monaco right away. 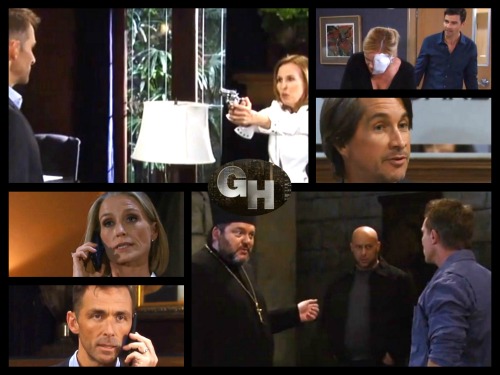 Valentin will head off to see Cassandra soon, but he’ll have another issue to tackle first. General Hospital spoilers reveal that Genie Francis will return as Laura on Wednesday. She’ll arrive for a showdown at Wyndemere.

Laura will hold a gun on Valentin and ask if this is how it felt when he held one on her son. It’s possible that this is a fantasy, but we wouldn’t put something like this past Laura. She can be nasty when she wants to be and Valentin deserves it.

Perhaps Laura has heard the latest news from Lulu (Emme Rylan). That would certainly get her riled up enough for a fierce faceoff. General Hospital spoilers hint that big surprises are ahead, so GH fans will want to stay tuned. We’ll give you updates as other details emerge. Stick with the ABC soap and don’t forget to check CDL often for the latest General Hospital spoilers, updates and news.