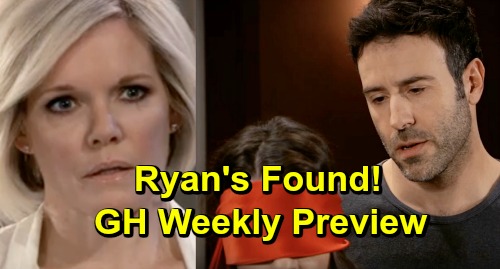 General Hospital (GH) spoilers preview teases that there will be major movement on two big GH storylines during the week, April 3-5. According to the new General Hospital video promo, viewers can expect some revelations when it comes to both the Shiloh Archer (Coby Ryan McLaughlin) and the Ryan Chamberlain (Jon Lindstrom) stories.

Let’s start with the Shiloh saga. The GH promo teases that Shiloh will be doing some “master manipulating” this week when it comes to both Sam McCall (Kelly Monaco) and Kristina Corinthos-Davis (Lexi Ainsworth). First off, Shiloh is shown standing creepily by while Sam dons a big red blindfold.

This is likely for some Dawn of Day (DOD) ritual or class. Sam has been trying to infiltrate Shiloh’s closest circle in order to protect Kristina, and it looks like she’s certainly in.

But it’s not yet clear whether Shiloh is aware that Sam is playing him. Sam runs a good con, but Shiloh is keen manipulator in his own right, and he could be onto Sam’s ruse. We’ll see what the week ultimately holds for these two and their growing connection and double con.

The GH preview also shows Shiloh and Kristina, apparently in the aftermath of Kristina’s “trust offering.” In order to join “the trust,” aka Shiloh’s inner circle, Kristina was tasked with divulging a huge secret. Since she didn’t have any major life secrets, she was given the go-ahead to divulge a secret belonging to someone close to her.

Of course, that likely means that Kristina will be ratting out one of her parent’s secrets. Alexis Davis (Nancy Lee Grahn) certainly has some skeletons in her closet that she wouldn’t want a bunch of DOD people to hear, but chances are Kristina is going to divulge something incriminating from Sonny Corinthos’ (Maurice Benard) life.

Of course, Sonny’s involved in organized crime and has a lot of secrets to be kept, so it’s anyone’s guess what Kristina could reveal about him and his business.

Kristina is shown telling Shiloh that her trust offering was something that she never told anyone before, and Shiloh thanks her for entrusting him with “the information.” Of course, if the information is about Sonny, and he finds out about it, then he could easily set out to eliminate anyone who knows damaging information about him.

Now, let’s turn to Ryan. The GH promo shows Ava Jerome (Maura West) unhappily reliving some of her past romance with Ryan and waking up in a cold sweat after a nightmare. She’s clearly shaken by the whole experience of Ryan, and she’s also shown telling Julian Jerome (Wiliam deVry) that she hopes Ryan is alive so she can kill him.

But even if a body has been found, that’s not necessarily the end of the saga. One would imagine that any body found in the Niagara River after all this time would be in pretty bad shape, and it could be a false find. It’s always possible that a body is found and misidentified as Ryan’s, while Ryan escapes and comes back at a later date for his “goddess” Ava.