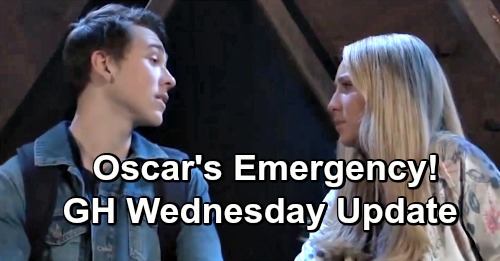 General Hospital (GH) spoilers update for Wednesday, April 3, tease that Kristina Corinthos-Davis (Lexi Ainsworth) will turn to Julian Jerome (William deVry) for help. It appears she’ll ask for an advance, so Julian will ask just how much cash she needs. Kristina should keep her total as low as she can, but those upper level Dawn of Day courses are clearly for big spenders.

Nevertheless, Kristina may conceal what she plans to use the money for and hope Julian caves in. She’s determined to go as far as she can with DoD, which includes entering “The Trust.” Kristina will once again discuss that possibility with Shiloh Archer (Coby Ryan McLaughlin) on Wednesday. Shiloh will warn Kristina after she becomes part of the group, she can’t go back to the way things were before.

Kristina will find the exclusive aspect of “The Trust” alluring and exciting. She’ll gladly sign on for this risky level, but she’ll have to provide her trust offering first. Kristina recorded a terrible secret that involves Alexis Davis (Nancy Lee Grahn), so Shiloh will score some dangerous leverage soon.

Meanwhile, Jason Morgan (Steve Burton) will speak with Sam McCall (Kelly Monaco) privately. They’ll avoid Shiloh long enough to have a crucial conversation about their son. Jason won’t be happy about Shiloh getting so close to Danny Morgan (T.K. Weaver), so he’ll warn Sam that it can’t happen again. He’ll understand that Sam wants to pull off her scheme, but he won’t let Danny get caught in the middle.

Sam may point out that Shiloh put her on the spot the other day. Brad Cooper (Parry Shen) was also there, so Sam knew Danny would be OK with Shiloh for a few minutes. It’s not like she’s enrolling Danny in DoD classes or anything, so Sam may promise Jason that their son will be kept out of this.

Other General Hospital spoilers say Margaux Dawson (Elizabeth Hendrickson) will encounter someone with concerns. A worried GH character will push for an investigation – most likely one that involves Shiloh and Dawn of Day. This could be Harrison Chase (Josh Swickard), Jordan Ashford (Briana Nicole Henry), Michael Corinthos (Chad Duell) or some other determined Port Charles resident.

Unfortunately, Margaux won’t be very willing to listen. She’s already been singing Shiloh’s praises, so she probably won’t think there’s any reason to fret. However, Michael can’t give up on Kristina. He wants to protect his little sis, so he’ll talk to Sonny Corinthos (Maurice Benard) again on Wednesday. Sonny will just want to make sure Michael has an exit strategy since dealing with Shiloh could be risky.

Across town, Franco Baldwin (Roger Howarth) will angrily shout that he’s just getting started. It seems he’ll be riled over Aiden Webber’s (Jason David) classmates and their narrow-minded parents. Cameron Webber (William Lipton) will look stunned by Franco’s sudden rage flareup, but he’ll want to help if he can.

Elizabeth Webber (Rebecca Herbst) will also seek guidance from Bobbie Spencer (Jacklyn Zeman), so let’s hope Liz will get some good words of wisdom. Finally, Oscar Nero (Garren Stitt) will want to give Josslyn Jacks (Eden McCoy) something special. His time is running out, so every moment they get to spend together is one more memory. That’s a gift on its own, but Oscar will hope his other present touches Joss’ heart.