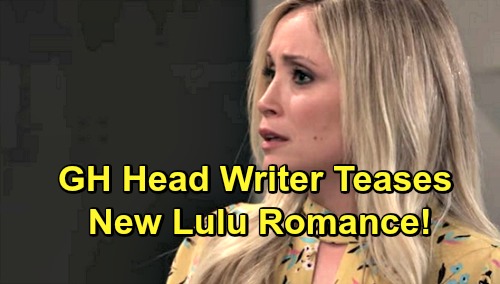 General Hospital (GH) spoilers tease that Lulu Falconeri (Emme Rylan) will face an uncertain future. Dante Falconeri (Dominic Zamprogna) is pretty messed up in the head after his mission in Turkey. He realizes he’s been brainwashed and needs to go through the proper channels for treatment.

Unfortunately, Lulu didn’t take the news very well – and that’s partly because Dante didn’t truly explain it. Despite being crystal clear while talking with Anna Devane (Finola Hughes), Dante kept things vague with his wife. Perhaps he didn’t want to scare Lulu or just felt like it’d be easier for her to let go if she didn’t know the whole story.

Of course, the real reason Dante left so much out was for drama’s sake. Lulu surely wouldn’t have lashed out so much if Dante had spilled all. He could’ve easily admitted that he nearly lost control with a knife at the Metro Court. Dante could’ve even said he has recurring nightmares where he shoots and kills Lulu in their own home.

Dante really should’ve just come right out and said, “I’m afraid I’ll murder you, our son or my stepdaughter.” That’s the truth of the matter, and it’s a very real possibility that Dante can’t ignore. However, Lulu needs to feel a bit abandoned here. The less sympathy she feels, the better – at least in terms of the story.

Emme Rylan is still on contract at General Hospital and will likely need a new love interest eventually. Even thought she’s somewhat miffed about Dante’s decision, she became emotional and promised she would wait forever if she has to. Nevertheless, forever is an awfully long time. That’s especially true if resentment is building, which is what could end up happening.

In the latest issue of Soap Opera Digest, Co-Head Writer Shelly Altman talked about Lulu’s frame of mind and what her intentions are. She offered some great clues about Lulu’s GH future. “He recommended that she not wait for him, and that was hard for her to take,” Altman said. “She does plan to wait for him, but she has no idea how long that wait might be.”

Will Lulu ultimately get tired of waiting? Altman hinted that Lulu just might. She pointed out that Lulu “will remain rather unsettled, and we will see just have to see how long she can wait for him.” That doesn’t exactly sound promising since Zamprogna doesn’t want to be locked into a long-term contract.