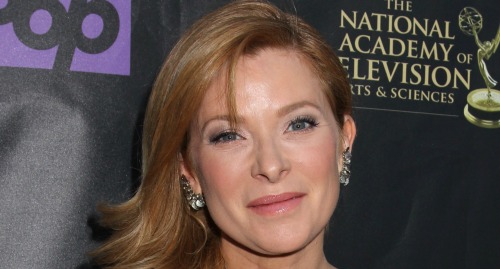 General Hospital (GH) spoilers tease that some new insider leaks point to an intriguing Nina Reeves recast. The role is currently played by Michelle Stafford, but she’ll be heading back to The Young and the Restless soon. Since Stafford will be reprising her role as Phyllis Summers on Y&R, General Hospital needs someone to take her place as Nina.

The show could’ve chosen to just drop the real daughter storyline and be done with it, but this insider claims they’ve decided to move forward. Since GH has spent so much time building up the big reveal, they need to follow through on it and give fans the proper resolution. However, finding a Nina-ish actress in a short amount of time has likely been a challenge.

That’s probably why there’s buzz about the new Nina being a somewhat odd choice. One name that’s surfaced is Cady McClain, whose last soap role was as crazy Kelly Andrews on The Young and the Restless. McClain is Jon Lindstrom’s (Dr. Kevin Collins) wife, so she probably runs with the GH crowd and would be easy to work out a deal with.

This insider actually liked a few tweets that guessed McClain, which could be a hint that the suspicion is correct. Word has there’s another name being tossed around, so it may not be a done deal yet. Nevertheless, McClain might be the frontrunner based on the way things are shaping up.

The names being considered are both said to be ABC soap alums, which certainly fits for McClain. Longtime soap fans will recall she starred as Dixie Cooney Martin on ABC’s All My Children. McClain actually helped James Patrick Stuart (Valentin Cassadine) score his role as Will Cortlandt on the same daytime drama.

Stuart first read with McClain when he was just starting out in the soap world, so maybe it’s all coming full circle. That could be another clue since McClain would obviously be working with Stuart if she plays Nina. We should note that there’s no news on Nina’s long-term future. It’s possible General Hospital just wants to get a new Nina in there and see how she does before they make a firm decision.

In other words, a Nina recast might just be around to wrap up all the daughter chaos. Sasha Gilmore (Sofia Mattsson) still has to be revealed as Nina’s fake daughter, and it looks like Willow Tait (Katelyn MacMullen) will be revealed as the real one. After this explosive storyline reaches its conclusion, GH may either let Nina stick around or usher her out of town.