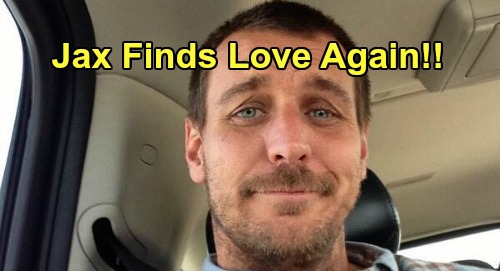 General Hospital (GH) spoilers tease that Jasper “Jax” Jacks (Ingo Rademacher) is making a comeback. Rademacher started filming new scenes last week, so it won’t be that long until Jax is onscreen again. Of course, we have to consider what Jax might be up to once he hits town. GH obviously wants Jax around for some hot storylines, so let’s think about what those stories might be.

The first one is a no-brainer since Josslyn Jacks (Eden McCoy) is about to lose Oscar Nero (Garren Stitt). General Hospital spoilers say Oscar’s rapid decline will bring devastation. Once Oscar actually dies, the pain will get even worse for Joss. This will certainly be a tough goodbye for the teen, so a warm hello should make her feel better. Josslyn’s reunion with Jax will bring her at least a little joy.

However, there’ll undoubtedly be more to Jax’s comeback than just doting on his daughter. Could Jax find love again in Port Charles? Depending on how long Jax is around, it seems likely. General Hospital spoilers say there could be several leading ladies up for grabs, so GH might as well try at least one of them with Jax.

The first option is a familiar one. Nobody would be surprised if Carly Corinthos (Laura Wright) started inching back in Jax’s direction. That’s especially true if Carly loses Sonny Corinthos’ (Maurice Benard) baby. That loss could be rough on “CarSon” and open for the door for “CarJax” to pair up again. Josslyn would probably be rooting for that, particularly after sinking so low following Oscar’s death.

Then again, General Hospital could try something fresh. They might go for the unexpected and put Jax with someone like Ava Jerome (Maura West). She deserves a good guy after nearly marrying Ryan Chamberlain (Jon Lindstrom), the serial killer who murdered Kiki Jerome (Hayley Erin). Jax has made his fair share of mistakes, but none of them would put him in the same evil realm as Ryan.

Plus, it’d bring great drama since Carly would hate this pairing with a passion! Ava and Jax could be a fun possibility. Another option might be Jax and Dr. Kim Nero (Tamara Braun). It’d be interesting if Kim fell for Jax in the aftermath of Oscar’s passing. Jax will definitely be hanging around Josslyn, who may stay close to Kim as they mourn.

How would Joss feel if her dad got together with her deceased boyfriend’s mom? Josslyn knows Oscar wanted Kim and Drew Cain (Billy Miller) to reunite, so she might not be too happy about it. That’d be a fantastic opportunity for drama, too.