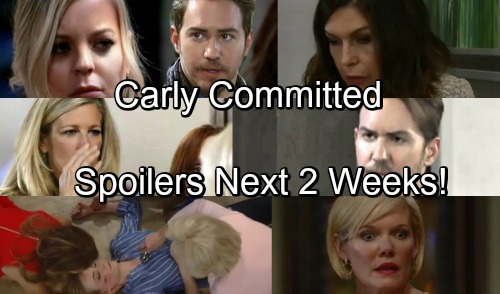 General Hospital (GH) spoilers for the next two weeks tease that some stunning moments are ahead. The week of May 14-18 will bring an unexpected interruption for Michael (Chad Duell) and Dante (Dominc Zamprogna). They’ll be chatting about the future when they get some urgent news.

Nelle (Chloe Lanier) will be loaded into an ambulance and taken to GH. As soon as Michael gets updates, he’ll rush over to join her. Meanwhile, Dante will visit the Quartermaine mansion and place Carly (Laura Wright) under arrest. Monica (Patty McCormack), Josslyn (Eden McCoy) and Michael will all lash out over Carly’s role in Nelle’s suffering.

Sonny (Maurice Benard) will smell a rat when he hears Nelle’s claims. He won’t buy that Carly pushed Nelle, but he’ll certainly have more concerns about his wife’s mental health. Sonny will also worry about the legal battle Carly’s headed into. The situation will be dire, but Diane (Carolyn Henessy) will give this fight everything she’s got. Too bad it probably won’t be enough to avoid consequences!

Meanwhile, Ava (Maura West) will retake a little control. Perhaps she saw the fight between Nelle and Carly. Even if she didn’t, Ava could lie and say she did. She might tell Nelle they’re even in terms of blackmail. Ava may suggest that she’ll keep her mouth shut about Nelle’s bogus accusations and Nelle can stay quiet about the test results peeking.

Other General Hospital spoilers say Anna will face some Nurses Ball craziness. GH fans can expect this to be a big night for her. Perhaps some wild Heinrik revelations are on the way. Sam (Kelly Monaco) may face some of those, too. She’ll stumble across an intriguing hint, so Peter (Wes Ramsey) had better watch his back.

The week of May 21-25 will deliver some tension for Valentin (James Patrick Stuart) and Nina (Michelle Stafford). She may not learn the whole story, but she’ll probably find out that Valentin’s been keeping secrets. While Valentin works to get Nina back on his side, Peter will feel duped. Will he find Valentin’s been hiding crucial info? Could Peter learn Anna’s behind the motherly emails?

Whatever the case, Peter will do some scheming and that can’t be good! Over with Nelle, she’ll finally get the support she desires. Michael will be nothing but kind and doting, so her mansion fall may work out for her in the end. As long as the baby’s OK, Nelle’s plans will be shaping up just fine.

Over with Carly, she’ll face devastation. Since Carly will be forced into a mental institution soon, perhaps she’ll have to accept a deal to avoid jailtime. At GH, Kiki (Haley Erin) will make an impulsive decision that spells trouble. If Dr. Bensch (James DePaiva) pulls another stunt, Kiki may get riled and provoke his wrath.

Griffin (Matt Cohen) will also find himself stuck in drama, so this could be about Kiki or even his Heinrik secret. Regardless, General Hospital spoilers say things are heating up in Port Charles. We’ll keep you posted as other GH details emerge. Stay tuned to the ABC soap and don’t forget to check CDL often for the latest General Hospital spoilers, updates and news.