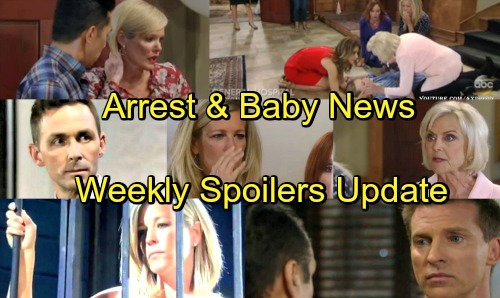 General Hospital (GH) spoilers update for the week of May 14-18 tease that we’ll see plenty of heated confrontations. Carly (Laura Wright) will certainly face her fair share of them. She’ll start by facing off with Monica (Patty McCormack) at the Quartermaine mansion. Since Carly’s been an outraged mess all afternoon, Monica will wonder if she intentionally pushed Nelle (Chloe Lanier) down the stairs.

Carly will deny that accusation, but she’ll end up in a tight spot with the cops later. When Nelle also insists this was a deliberate attack, Dante (Dominic Zamprogna) will arrest Carly. Meanwhile, Sonny (Maurice Benard) and Jason (Steve Burton) will mull over their findings in Croton. They hoped to dig up the body and gun, but someone obviously got there before them.

Sonny will struggle to figure out who might be in possession of this evidence. He’ll also be curious about why Mike (Max Gail) seems to know so much. Jason will try to help Sonny crack the case, but it’ll have to wait. Once Sonny’s summoned for Carly’s legal woes, he’ll devote all his attention to her. Carly’s jam will be tough for Sonny and Diane (Carolyn Henessy) to clear up.

Back with Nelle, she’ll learn the fate of her baby from Kim (Tamara Braun). General Hospital spoilers say Kim will have good news to report, so it seems Michael (Chad Duell) and Nelle’s baby will survive that tumble. Of course, this week won’t just be about the Corinthos clan and those connected to them. The Nurses Ball will be the hot topic around town soon enough.

GH spoilers say there’ll be some hot performances, but the drama should be even hotter! Sam (Kelly Monaco) will form a plan, but it’ll quickly hit a snag. Fortunately, Sam will turn things around with a shocking discovery. She’ll locate a clue, so maybe it’ll help her back up her Peter (Wes Ramsey) suspicions.

Jason will also work on a plot this week. He’ll rely on Spinelli (Bradford Anderson) as his scheme moves forward. Over with Curtis (Donnell Turner), he’ll grow concerned about his upcoming proposal. Curtis will consider scrapping the idea, but it looks like he’ll ultimately move forward with it. He wants a future with Jordan (Vinessa Antoine) and popping the question will prove it.

Stella (Vinessa Antoine) will be dismayed, but she’ll just have to get on board. This love train’s rolling in whether she likes it or not. Finally, Finn (Michael Easton) will offer an apology to someone. Could he finally start to soften toward Chase (Josh Swickard)? Let’s hope so! Chase really shouldn’t be blamed for their father’s actions.